You are here: Home / HBCUs / Why the HBCU Mission is Critical in a Racially Divided America 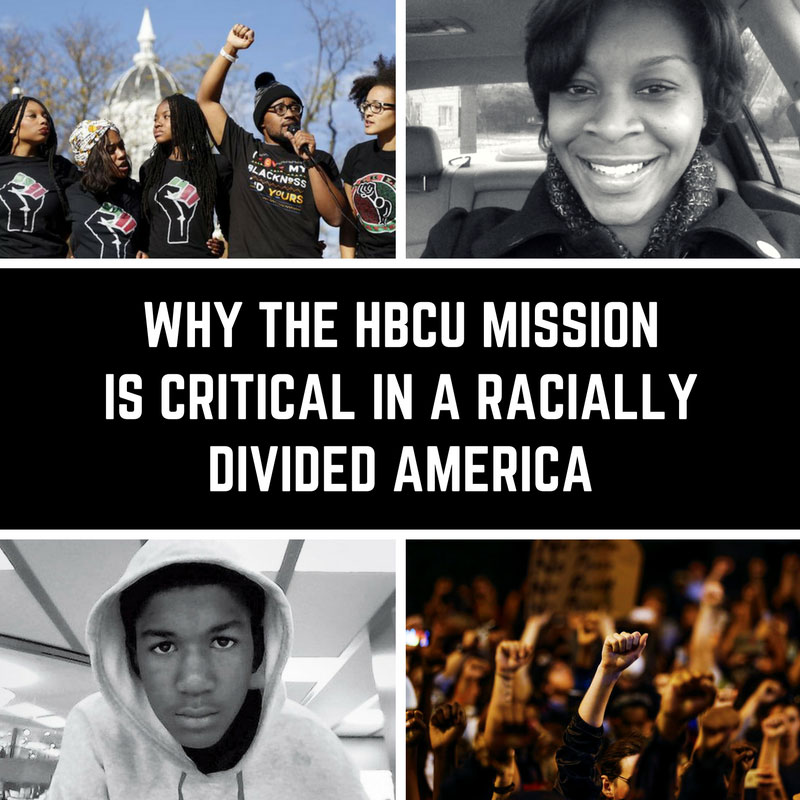 With many HBCUs reporting the increased enrollment of first-time college students and transfer students, I had to reflect on the many reasons why we see this trend. Was it the uproar at the University of Missouri that resulted in the firing of the university president and the resignation of the chancellor? Was it the Mizzou football team protesting, refusing to play until the president’s removal? Was it the killing of Trayvon Martin, Sandra Bland or the emergence of the Black Lives Matter movement?

All these topics found their way into the social conscience of college students across the country, especially students of color enrolled at a Predominantly White Institution’s (PWIs) and African Americans at HBCUs.

Understanding why the Mission of an HBCU is important from a student perspective.

HBCUs cannot take for granted the success of increased enrollment during this period in society as some increases may be attributed to planned success or some may have benefited from the rampant miss-treatment of students of color at PWIs. In any case, it might be a good idea for institutions to use their Office of Research and Institutional Assessment to survey their incoming class of students to determine where they may have considered going to school before enrolling in their institution. Did they transfer, and if so, from where and most importantly why did they choose your institution?

This information will certainly benefit the institution for future enrollment planning efforts and allow the university to understand a much more engaged student entering their institution.

The Racism is obvious.

Acts of discrimination against Black students continue at PWIs. In a recent article posted in the September issue of Inside Higher Ed, Scott Jaschik describes how several Black students protested on the campus of American University because a Black woman on campus reported that a White student threw a banana at her. In addition, it was reported by several Black students that bananas have been left outside their door in their residence hall.

Whatever is driving the increased racial tension at PWIs, the time is now for HBCUs to demonstrate that their campuses are safe spaces that are open for dissent and dialogue on national and social issues. Students of color who are making the transition from PWIs to HBCUs must understand and embrace the love of being the majority on campus and know that they are entering a “safe space.” As noted by Walter Kimbrough, President of Dillard University, in a recent Washington Post article, “black students HBCUs are the original safe spaces.”

Upholding the mission of an HBCU is a shared Responsibility.

New students coming to an HBCU campus must also realize that they are entering an environment full of intellectual vigor. This transition will require them to engage and discuss issues that affect the diaspora and beyond. They must realize they are entering the HBCU ranks of trailblazers, such as Stokely Carmichael, Ralph Bunche, Nikki Giovanni and Howard Thurman, who understood their obligation to engage and chip away at the issues that affected people that look like them and accepted the responsibility to speak up for the economically disadvantaged.

With the success of increased enrollment at many HBCUs, we cannot take for granted the greater responsibility this places on our institutional leadership. HBCU Presidents and its leadership must remain visible and open to talking with students in ways that establish trust and appreciation of their leadership. As stated by one of my favorite motivational speakers Steven Covey “Principled Centered Leadership is at the heart of change”.

This is an important time in history for HBCUs and steady leadership at the helm is not only necessary but paramount to the success of all HBCUs as closing the door on one HBCU is a detriment to all HBCUs.

Charles J. Gibbs is a Doctoral Student in the Department of Educational Leadership and Policy Studies, in the School of Education, at Howard University. Mr. Gibbs has served in several leadership roles in Higher Education from Vice Provost for Student Affairs, Dean of Student Housing, and Director of Athletics. He is a two-time Howard University graduate and has served on several University committees to enhance services for students, faculty, and staff.