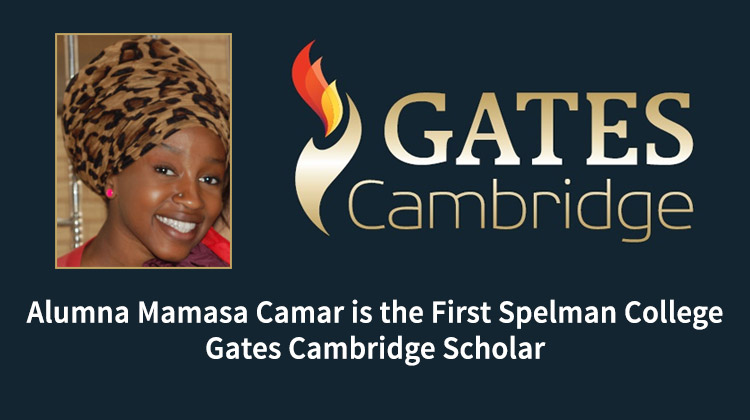 Spelman College alumna Mamasa Camara, C’2015, was recently named a Gates Cambridge scholar, a highly sought-after postgraduate recognition that supports future leaders who are committed to improving the lives of others. Camara is the first Spelman Gates Cambridge scholar, and the only African American and HBCU graduate among this year’s 35 U.S. scholarship recipients.

The scholarship, established in 2000 with a $210 million donation from the Bill and Melinda Gates Foundation, is awarded to applicants outside the United Kingdom to pursue a full-time postgraduate degree at the University of Cambridge, a public research university in England. Since 2001, the program has awarded more than 1,500 scholarships to applicants from more than 100 countries.

This fall, Camara will join the 2016 class of 90 scholars on the Cambridge campus, including 55 Gates Cambridge scholars who will be selected in April from other countries.

At Cambridge, Camara will seek a master’s degree in African studies that is focused on the research of female circumcision in Kenya between 1900 and 1960. Her research, an expansion of a project that she began at Spelman, will examine the complex social, political, and historical forces that influence present-day narratives and misconceptions about the practice.

“I feel honored the Gates committee is willing to invest in my work and regards it as something that the world needs. To represent Spelman in this endeavor is just amazing,” said Camara. “I am really excited that I will be among a group of people who are not just doing research, but actually working to change the world for the greater good.”

With the support of her research, Camara wants to broaden understanding about the practice. “As a Western society, we tend to homogenize a very diverse group of practices and rely on a universally available moral narrative of human rights to create knowledge about female circumcision,” she said. “The issue with this is that it misrepresents the practice and ignores underlying issues of poverty and access central to the African experience. Female circumcision is extremely complex and varies with regards to geographic space, ethnicity and religion. Dialogue is critical. Instead of simply deploring the practice, those who don’t practice circumcision need to learn the complexities and the deeply rooted implications.”

Margery Ganz, Ph.D., Spelman history professor and director of study abroad and international exchange, served as one of Camara’s advisors. “The combination of Mamasa’s hands-on work in The Gambia and her academic preparation will make her an expert in the field of female circumcision,” said Dr. Ganz.

A first-generation Gambian American, Camara was circumcised as an infant. During her childhood, growing up in a close-knit Gambian immigrant community in the Bronx, New York, she was always fascinated with the African identity and experience throughout the African diaspora. While a history major at Spelman, Camara began exploring those interests.

The summer following her first year at Spelman, she collaborated with Isatou Njie-Saidy, vice president of The Gambia, to organize an annual, televised women’s health conference in the country to provide health screenings while also giving local women a voice in the discourse on female circumcision and health disparities.

In addition to her outreach efforts in The Gambia, Camara has also been acknowledged for her scholarly research. In 2014, she won the inaugural School for International Training Study Abroad Undergraduate Research Award for her independent study project, “Imagined Communities: Changing Markets and the Implications for 21st Century Mali-China Migration.” The following year, her study of British colonial narratives on female circumcision in Kenya received an honor thesis award from the Spelman Department of History.

After completing her master’s degree at Cambridge, Camara plans to travel back to The Gambia to promote women’s health care. Eventually, her goal is to earn a doctorate and teach courses on the university level that cultivate a deeper understanding of Africa and its people.

Because of her experience at Spelman, Camara said she also wants her teaching career to emphasize the importance of critical thinking while helping students of diverse cultural and economic backgrounds to successfully navigate college life.

“Spelman endowed me with invaluable tools that continue to shape my decisions. It became a place where I encountered my own mind,” she said. “It makes you want to take on issues that others don’t want to take on because it positions you to find and correct silences and distortions in discourse and in everyday human experiences. It forces you to find your voice and carve out new spaces at Spelman and in the world. I am grateful for that.”