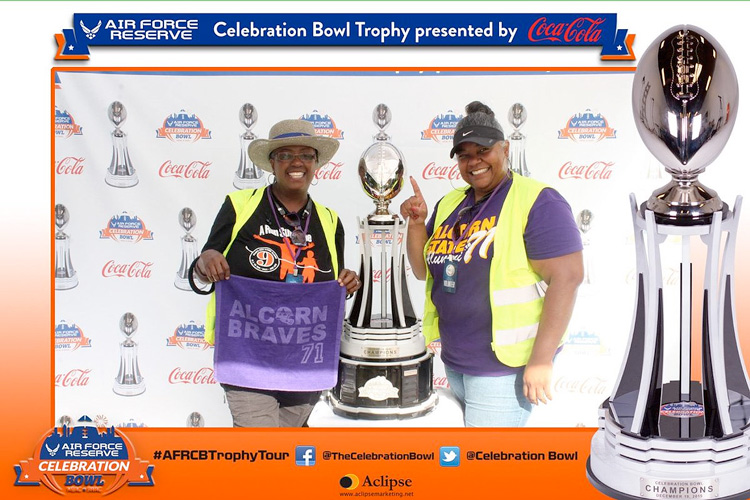 At each stop, fans can take pictures with the trophy and post them on Facebook, Twitter or Instagram using the official hashtag #AFRCBtrophytour for the chance to win a VIP Experience at the 2016 Air Force Reserve Celebration Bowl. Additionally, fans can vote online for their school to be a stop on the 2017 route of the Celebration Bowl Trophy Tour. Voting is now open at http://www.thecelebrationbowl.com/vote-for-your-trophy-tour-stop/

“Hosting a trophy tour across a number of high-profile college football games allows fans to engage with and experience a piece of the Celebration Bowl like never before,” said John Grant, executive director of the Air Force Reserve Celebration Bowl. “We are excited to see fans support the bowl game and vote online for the trophy to visit their school next year.”

Establishing itself as the first bowl game of the season, the Air Force Reserve Celebration Bowl is a Historically Black Colleges and Universities (HBCU) postseason football game owned and operated by ESPN Events, a division of ESPN. It is a championship-style game between the MEAC and SWAC division champions and will be televised on ABC at noon on Saturday, Dec. 17. ESPN works with 100 Black Men of Atlanta to organize the game’s ancillary events which include a youth symposium, robotics showcase, college fair, fan experience and more.

Fans can purchase tickets to the Air Force Reserve Celebration Bowl at ticketmaster.com, by calling Ticketmaster at 1-800-745-3000 or at the Georgia Dome box office by mid-September. Prices range from $15 to $60, plus applicable taxes and fees. A full list of events surrounding the game will be made available on the event’s website by mid-September.