You are here: Home / HBCUs / Clark Atlanta Senior Plans to Use Degree to Rid Hometown of “Chi-Raq” Image 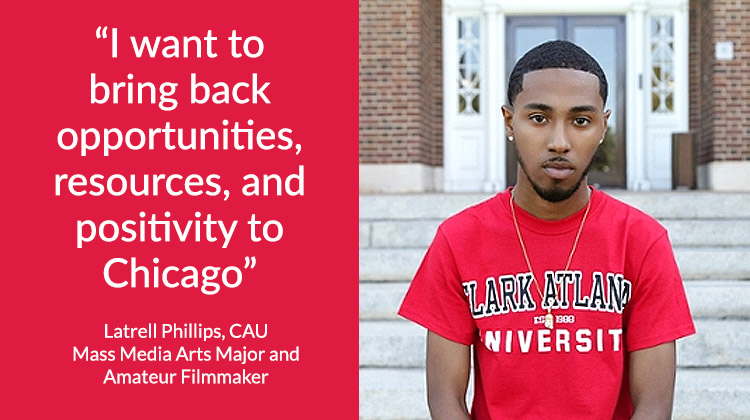 As Clark Atlanta University (CAU) prepares to head to the Windy City to compete in the Chicago Football Classic, native son Latrell Phillips hopes to use his CAU degree to help rid the city of its dubious moniker, “Chi-Raq.”  Chicago earned the nickname thanks to gun violence, which for years has plagued America’s third largest city.  Phillips, a senior mass media arts major and amateur filmmaker, wants to use his movie-making skills to showcase a more positive side of his hometown that he says outsiders don’t get to see.

“I want to shoot movies depicting a better Chicago,” said Phillips.  “I want to bring back opportunities, resources, and positivity to Chicago,” he said, with a gigantic smile.

Watching Phillips stroll across campus, chest pushed out and head up high, it’s clear he is a man of purpose intent on doing just what he said.  Phillips is not waiting for graduation in May 2017, either.  He’s already released four video documentaries, with his sights set on producing more.  It’s also clear by the repeated interruptions from fellow Panthers wanting to hug him and say hello, he is well respected on campus.  But making it to this point in his young life was not easy.

Phillips, an only child, had to delicately navigate gang territories where he grew up on Chicago’s South Side.  It’s also an area of Chicago, which recorded the third highest number of black males shot by police in the past six years, according to a study by the Chicago Tribune.  He credits his mother for keeping him out of trouble and harm’s way.  “She made sure I was focused on education and being successful,” Phillips said.  He graduated from Urban Prep Academy Englewood, which boasts a 100 percent college acceptance rate.  “She made sacrifices to position me to be successful,” he said.

Now it’s paying off for Phillips, recently chosen to represent fellow CAU students from Chicago in a photo shoot promoting the Classic.  He also has hosted his own show on the student-run radio station on campus.

In the meantime, Phillips is busy shuffling his work schedule so he can make the trip home to watch his Panthers do battle against Central State.  Kick off is set for Sept. 10, 2016, at 3:30 p.m. “It’s an amazing feeling that my illustrious university will be playing in the greatest city in the world,” Phillips exclaimed. “Let’s go Panthers!”