You are here: Home / HBCUs / The Little Things that Make a Big Difference at HBCUs 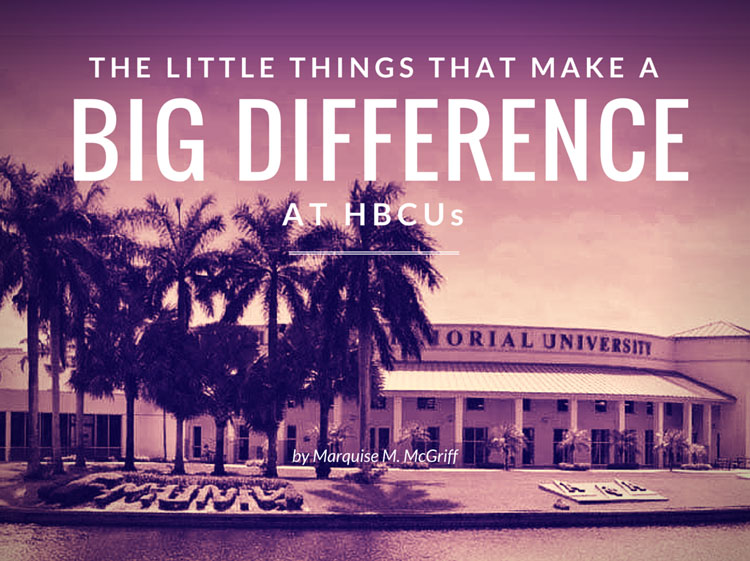 I walked into my HBCU’s dining hall yesterday (for the first time in 4 days) starving, but without a real appetite. I was just so sick and tired of dealing with the same crap, that I had already convinced myself that I would not like whatever was on the menu that day; but I went inside anyway. I held a short conversation with sweet Ms. Lillie and Ms. Dixon (aliases), but I had to eventually start walking away so that the conversation would end. As they knew, I was sick and tired and had no intentions on having a family reunion at that moment.

I proceeded to the serving line, and after the server tried to play around with me a bit, I had to inform her that I was sick and tired and simply not in the mood. Do not get me wrong, she is always very nice, and we get along pretty well; we often even joke with each other, but she is usually the only one telling the jokes – I just laugh and nod because I hardly ever really know what she is saying (she is not American, and her English is far from the best). However, after I informed her of my mood, she was no longer as jolly, in fact, she mellowed down so much that she almost looked as sick and tired as I did.

Just as I had convinced myself, I did not like what was for lunch. It was not nasty. Neither cold nor old. I was just sick and tired. That is the exact reason why I had not been in the dining hall for so many days! I went to discard my food, and just as I was leaving, someone was coming behind me screaming “Hey!” When I turned around, with that “I know you ain’t talking to me” face, she quickly apologized for not knowing my name. After realizing it was the server from earlier, I quickly apologized because had I known it was her, I would not have turned around that way; plus, I did not know her name neither.

I know it is something foreign, but that is it – which is why I did not give her an alias. After we both apologized, she offered me some hot water and a tea bag that she went in the back and prepared for me after serving me my food earlier. She said she saw how sick and tired I was, and how different I was from my normal self, and [she] did not want me to leave the same way I came. The way she saw it was: Even if it did not make me feel all the way better, at least I would leave with something hot in my stomach. I thanked her, and she responded with “You don’t have to thank me. You should know I’m always here for you. We’re all here for you.” That – I actually fully understood. With that, I took my tea and left. Still sick and tired, but already feeling better.

I know some of you were reading, waiting to get to the part that you could share this with the hashtag #WhyIWontGoToAnHBCU. But I will not let you. I would never give you the satisfaction. I would never denounce the community that has paved the way for me and so many before me.

You see, that lady giving me that hot tea might not seem like a big deal to you. But her taking out her time to leave the serving line – that she gets paid to work – just to make me feel better means the entire world to me. The bitter truth is, I likely would not get that somewhere else. If I was not at an HBCU, the “lunch lady” would not have cared about me being sick and tired. Neither would she have put her job on the line to make me feel okay.

This. This! This is exactly why HBCUs still matter. It is not about the numbers and the statistics. Enough of trying to compare ourselves to PWIs to prove our relevancy. Enough of the talk of what we need to do to stay competitive. How about we just keep doing what we have been doing all along – caring for people. Which is what she did for me. I mean, that is what has brought us this far. Opening our doors to those who were shut out of elsewhere and giving chances to those who were told they were undeserving.

I was not going to write this – and I almost did not. Then it dawned on me: If not me, then who?

Who would have given her some recognition?

More importantly: Who would defend our HBCUs for what they are and not what they should be?

Who would realize that we are already good enough?

Who would realize that fancy charts and graphs will never capture half of what we do?

But the scariest question of all perhaps, is: When?

Marquise M. McGriff, 19, is a junior at the illustrious Florida Memorial University in Miami Gardens, FL. He is a native of Miami, FL and has dedicated the rest of his tenure at FMU to changing his community's negative perceptions of his beloved institution. On a larger scale, he is working diligently in redeeming the images of HBCUs on a national scale. He is an award-winning public speaker and essay writer, with aspirations to developing both skills professionally in the years to come.