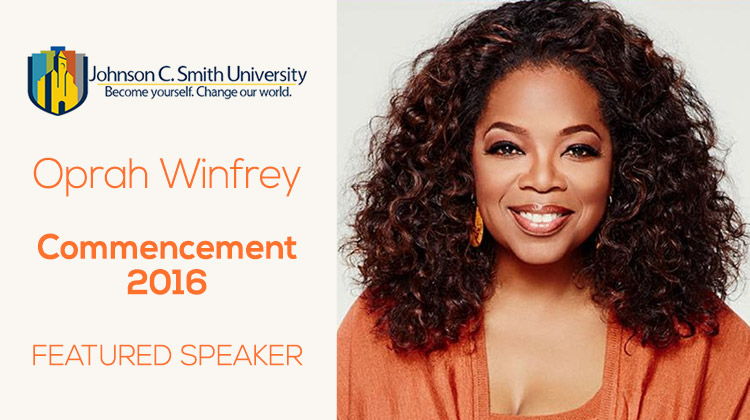 Winfrey, who turned her 25-season, record-breaking talk show into a publishing, broadcasting and philanthropic empire, has continuously used her influence to support education and empowerment worldwide. In addition to encouraging millions to live their best life now, she formed Oprah’s Angel Network in 1998, and through that public charity raised monies for women’s shelters and helped establish 60 schools in 13 countries. The Oprah Winfrey Scholars Program has granted millions in scholarships to students who have committed to giving back to their communities.

However, when the ‘First Lady of Talk Shows’ addresses JCSU’s 330 graduates, her words will bear special import to two faces in the crowd, whose lives she has personally transformed. Noluthando “Thando” Dlomo and Nompumelelo “Mpumi” Nobiva are graduates of the Oprah Winfrey Leadership Academy for Girls in South Africa, which Winfrey established in 2007 and invested more than $40 million to educate students in grades seven through 12.

Thando, Mpumi and academy mate Andronica Klaas have all flourished in their time at JCSU. Thando is Miss JCSU 2016, and represented the school with honor at the National Black College Alumni Hall of Fame. Mpumi spoke last semester alongside Nobel Peace Prize Laureate Leymah Gbowee and is an in-demand inspirational speaker. Andronica, who will graduate in 2017, was among 83 students from across the U.S. tapped to be a White House HBCU All-Star.

Bishop Claude Richard Alexander Jr., senior pastor at The Park Church in Charlotte, will serve as Baccalaureate speaker. Since his arrival 25 years ago, Alexander has overseen The Park’s expansion to over 9,000 members and 80 ministries, as well as three expansion projects. Baccalaureate service will be held on Friday, May 13 at 6 p.m. at the Jane M. Smith Memorial Church.