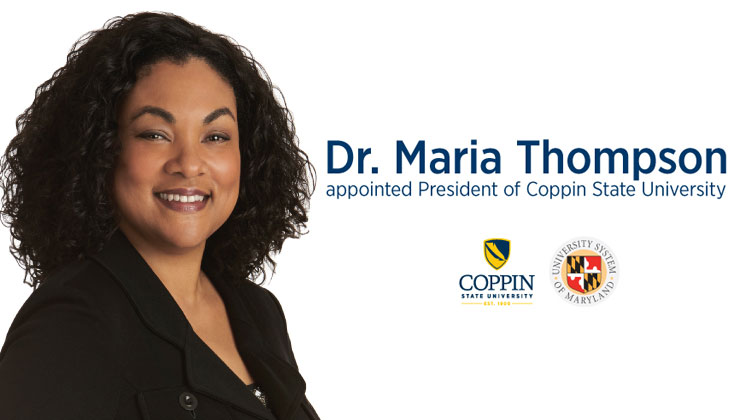 James L. Shea, chair of the University System of Maryland (USM) Board of Regents, announced the appointment of Maria Thompson, Ph.D. as president of Coppin State University on Tuesday, May 19th, 2015. Thompson is currently the provost and vice president for academic affairs at the State University of New York at Oneonta (SUNY Oneonta).

Thompson has held her position at SUNY Oneonta since 2011 after spending 13 years as a leading administrator for research and sponsored programs at Tennessee State University, a historically black institution in Nashville, Tenn.

“We are delighted to welcome Dr. Thompson as president of Coppin State University,” said Chairman Shea. “Her background as a top-level academic leader at SUNY-Oneonta, and her earlier experience in building a research enterprise at an urban historically black institution, position her well to advance Coppin as a vital institution in Baltimore and the state.”

“I look forward to working with the faculty, staff, students and other stakeholders to continue the university’s commitment to preparing graduates who are analytical, socially responsible and lifelong learners,” Thompson said. “Urban higher education plays a vital role in shaping the future of local, national and global communities and I am excited about joining a campus with a rich legacy of community engagement.”

As the chief academic officer for SUNY Oneonta, Thompson has led the educational mission for a public, regional comprehensive university offering bachelor’s and master’s degrees to 6,000 students. She has overseen institutional accreditation, institutional planning and assessment, and professional development of more than 500 full- and part-time faculty members. She initiated the first academic master plan for the campus and implemented a plan for restructuring the division of academic affairs to strengthen the university’s long-term strategic position.

“Dr. Thompson has had such an impressive career in higher education,” said USM Chancellor William E. “Brit” Kirwan.  “In her four years at SUNY Oneonta, she has led an impressive university-wide effort to advance the quality of the institution’s academic programs.  Her leadership of the research programs at Tennessee State University is equally impressive. Her time at TSU is especially relevant as she assume the leadership of Coppin State University because, like CSU, it is a historically black institution in an urban setting.  We are very fortunate to have found a person of Dr. Thompson’s quality to lead CSU into the future.

“I also want to express my deep gratitude and appreciation to the presidential search-and-screen committee.  Under the skilled direction of Michael Cryor, the committee of faculty, staff, students, and community representatives worked diligently and effectively to identify a pool of highly accomplished applicants from which Dr. Thompson rose to the top.”

At SUNY Oneonta, in addition to the successful reaffirmation of the college’s accreditation, Thompson led the implementation of a new budget model for academic programs. She is vice chair of the SUNY Association of Chief Academic Officers, an organization of provosts from all 64 SUNY campuses. At Tennessee State, Thompson developed and executed a plan that increased externally funded projects to more than $45 million by focusing on grants and contracts that provided experiential learning opportunities for students.

Thompson graduated from Tennessee State University and holds an M.S. from the Ohio State University in textiles. She earned her doctorate in textile science and textile economics from the University of Tennessee. She completed the Institute for Educational Management at Harvard University in 2011 and, in 2013, completed the Spectrum Executive Leadership Program sponsored by the American Council on Education. She is in the 2014-15 class of the Executive Leadership Academy, a leadership development program jointly developed by the American Academic Leadership Institute, the American Association of State Colleges and Universities, and the Council of Independent Colleges.

The USM Board of Regents in July 2013 appointed Mortimer H. Neufville, Ph.D., to a two-year term as president, effective through June 30, 2015. He began his service to Coppin as interim president in January 2013. He played a critical role in advancing the university’s future while the board’s Special Review Committee conducted a comprehensive review of Coppin State. The board’s analysis developed strategies to increase student retention and graduation rates, improve administrative operations and financial stability, and build a culture focused on success.

“I offer my profound appreciation to Mort Neufville for his leadership of Coppin State University during this transitional time in the university’s history,” Kirwan said. “Dr. Neufville has been a great friend of the USM, taking on appointments as interim president of both University of Maryland Eastern Shore and Coppin State before his two-year appointment as CSU president. We are grateful to Mort Neufville for his insight and stewardship.”