Johnson C. Smith University formally recognized President Emeritus Dr. Dorothy Cowser Yancy with the April 11 naming ceremony of the Information and Technology Hall in her honor. The first and only woman to be appointed president in JCSU’s 148-year history, she has become revered as our “Technology President.”

The ceremony opened with a welcome by President Ronald L. Carter and comments by Monroe Miller, chairman of the Board of Trustees. Trustee Emeritus Thomas E. Baldwin ’71 and Dr. Magdy Attia, Chair of the Council of Deans and Dean of the College of Science, Technology, Engineering and Mathematics, offered tributes. The Board of Trustees conferred an honorary doctorate degree on Dr. Yancy following the naming ceremony.

“With this building, we celebrate the Yancy vision and the profound impact her support had and will continue to have on the academic and cultural life of the University for generations to come,” Carter said. 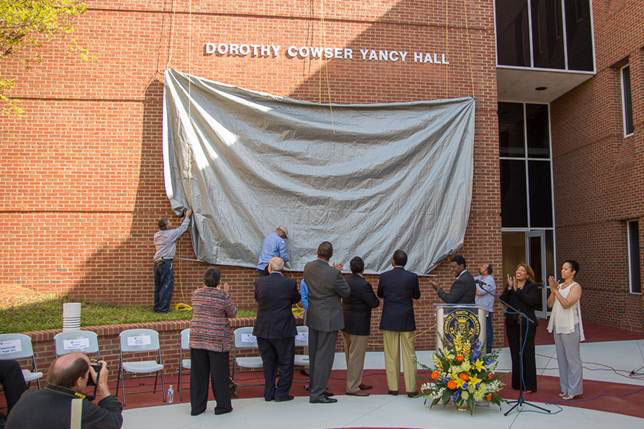 Dr. Yancy served JCSU from 1994 until 2008, and in that time tripled the endowment from $14 million to $53 million and raised over $145 million for the University. Under her leadership, the technology center, library and sports/academic complex were constructed. JCSU also became the first Historically Black College or University to receive a John D. and Catherine T. MacArthur Award, also known as a genius grant.

Her forward-thinking approach to the use of technology in higher education positioned JCSU as the first HBCU to become a “Laptop U,” where every student was issued an IBM Think Pad. That effort began in fall 2000, and prompted Yahoo Internet Life magazine to name JCSU one of the “Top 50 Most-Wired Small Colleges in the U.S.” While the device that is issued has changed with the ever-evolving technology, the initiative remains in place today.

“I came to respect Dr. Yancy’s understanding of technology and its implications for higher education. She not only understood how technology worked, but more importantly, how to deploy it to dramatically increase operational effectiveness and enhance students’ learning experiences,” Trustee Miller said. “I could picture her, when a CPU went down in the technology center, rushing over there in full repair mode and wiring diagram in hand.”

Coming from a farming family in Cherokee County, Ala., Dr. Yancy graduated from JCSU in 1964 with a bachelor’s degree in history and social science. She earned a master’s degree in history from the University of Massachusetts-Amherst; a certificate in management development from Harvard University; and a Ph.D. in political science from Atlanta University in 1974. She completed post-graduate work at the University of Singapore, Hampton University and Northeastern Illinois University. She went on to teach at Albany State University, Hampton University and Barat College, where she was the director of the Afro­American Studies Program. At Georgia Tech, she became the first African-American to be tenured as a full professor.
Dr. Yancy serves as a member of the Board of Trustees of Morehouse College and St. Augustine’s University; is on the Board of the United Negro College Fund and is a member of the USA Fund HBCU Advisory Committee.

“It’s been inspiring to witness the way in which Dr. Yancy has been so keenly committed to the caliber of education for our students,” Trustee Miller said. “She set a standard in terms of the conditions and qualities the University strives to achieve.”

With its central location in the University’s STEM hub, Dorothy Cowser Yancy Hall will continue to play an integral role in fostering leading-edge ideas and encouraging collaboration among future technology leaders.