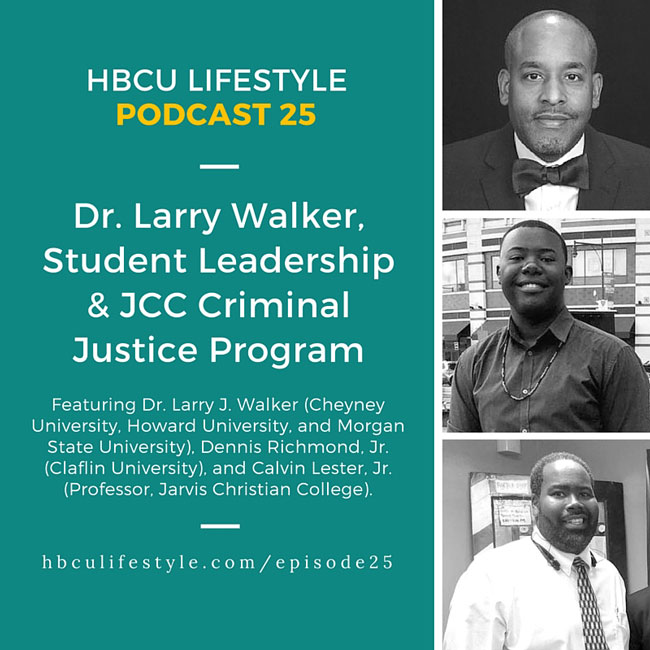 HBCU Lifestyle contributor Dr. Larry J. Walker is featured on Episode 25 as he explains why he believes HBCUs are one of the best places for incarcerated youth to move toward successful lives. The episode also includes another Claflin man, Dennis Richmond, Jr., and we learn what makes Jarvis Christian College’s Criminal Justice program one of the best in Texas.

This episode is brought to you by Greek Gear. Shop for Divine Nine Greek Apparel including Gifts, Clothes, Paddles and Jackets. Use coupon code BTS15 at checkout, and get 15% OFF your purchase.

Although he grew up in Yonkers, Dennis Richmond, Jr. knew he wanted to attend an HBCU and his home became Claflin University. Richmond talks about making the transition from New York to South Carolina, his role as a student leader and, most importantly, his passion for promoting HBCU life.

The best academic program in Criminal Justice is in Hawkins, Tex. at Jarvis Christian College. The college earned the honor from CorrectionalOfficer.org, a web site that promotes careers in criminal justice. Calvin Lester, Jr., Jarvis’s lead professor of Criminal Justice, talks about the program’s success.

Lester is an alumnus of Southern and the Southern University Law Center. Connect with him on Twitter at @CalvinBenLester.

In his op-ed for Diverse Issues in Education, Dr. Larry J. Walker makes a case for HBCUs and Hispanic Serving Institutions to be the places to help incarcerated youth put their lives back together. He discusses his piece “HBCUs, HSIs Equipped to Aid Incarcerated Youth” and the shifting political landscape that inspired it.

Dr. Walker is an educational consultant whose research examines the impact environmental factors have on the academic performance and social emotional functioning of students from HBCUs. His work has also been published in the University of Pennsylvania’s Center for Minority Serving Institutions. He is the co-editor of a book on graduate education at HBCUs, a former Congressional Fellow with the Congressional Black Caucus Foundation and Legislative Director for former Congressman Major R. Owens. During Dr. Walker’s tenure on Capitol Hill he worked on the No Child Left Behind Act, amendments to the Higher Education Act, he fought for increased funding for HBCUs, and worked closely with stakeholders. Dr. Walker earned his bachelor’s from Cheney, his M.Ed. from Howard, and his Ed.D. from Morgan State. Follow him on Twitter @LarryJWalker2.