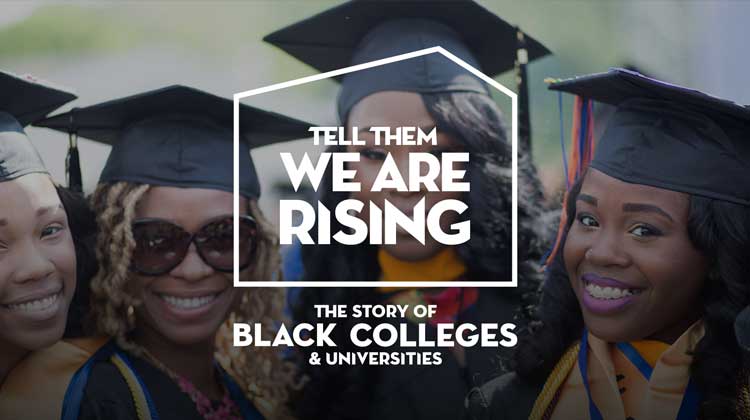 Firelight Films, the award-winning production company committed to making films about pivotal events, movements, and people in American history, is partnering with public media stations to present the latest film from Stanley Nelson, the preeminent storyteller of the African- American experience, to students, faculty and leadership at historically Black colleges and universities (HBCUs) around the country.

Beginning November 14 at Dillard University in Baton Rouge, LA, in partnership with public media station WYES, the HBCU tour for Tell Them We Are Rising: The Story of Black Colleges and Universities will feature screenings of the film followed by panel discussions with Nelson, university leaders, prominent alumni, and other invited guests to talk about the important issues explored in the documentary.

The tour is a major part of HBCU Rising, the year-long multi-platform engagement project designed to drive dialogue sparked by the film among a variety of audiences. Written, directed and produced by Nelson (The Black Panthers: Vanguard of the Revolution) and produced by Firelight Films, Tell Them We Are Rising reveals for the first time the complex history of how HBCUs, havens for Black intellectuals, artists and trailblazers, offered a path of promise toward the American dream, educated the architects of freedom movements throughout the decades and cultivated leaders in every field. The film also examines the impact HBCUs have had on American history, culture, and national identity for more than 150 years.

“We felt it was very important to showcase the film to students on HBCU campuses because this is a vital part of our African-American and American history,” said director Stanley Nelson. “Many students and even alumni are not aware of the deep history of how and why HBCUs were created and the foundation for success they provided for African Americans. We appreciate the Corporation for Public Broadcasting’s support and the partnership on the ground with local public television and radio stations to make this tour possible.”

A complete event details will be available closer to the event dates on HBCURising.com

Related Post – HBCU vs PWI Employment Debate: Our Grads Are in Demand

Major funding for the film, HBCU Rising and associated campus tours was provided by the Corporation for Public Broadcasting (CPB) as part of the public media initiative, American Graduate.
Tell Them We Are Rising: The Story of Black Colleges and Universities is directed, written and produced by Stanley Nelson, co-directed and co-produced by Marco Williams, written by Marcia Smith and produced by Cyndee Readdean and Stacey L. Holman, with executive producers Sally Jo Fifer, ITVS and Lois Vossen, Independent Lens. Funding for the film is provided by the CPB, ITVS, the National Endowment for the Humanities, the Andrew W. Mellon Foundation, the Lumina Foundation, the Arthur Vining Davis Foundations, and the Ford Foundation. 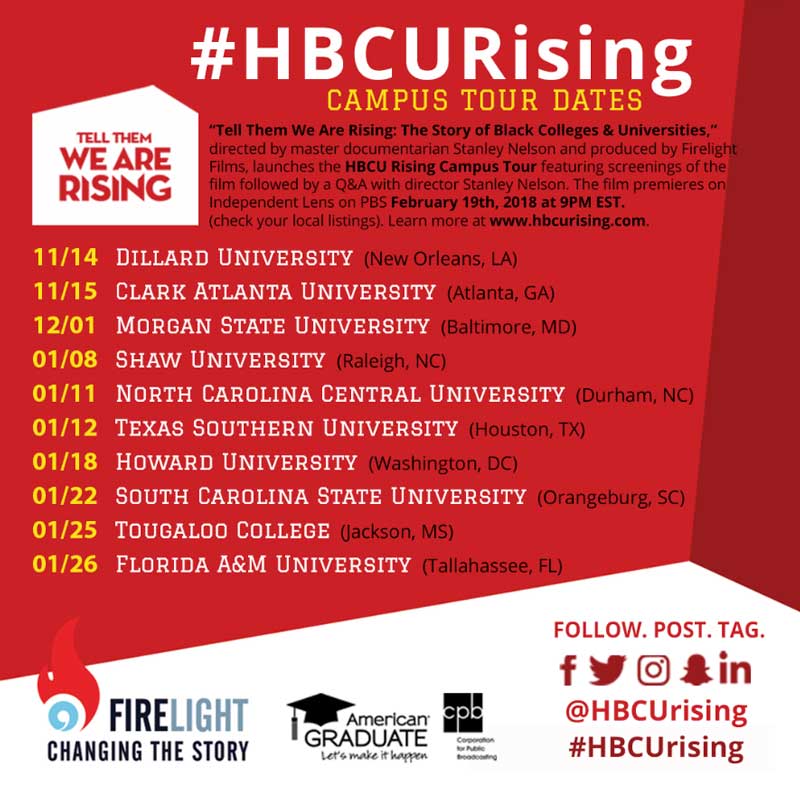 Firelight was founded in 2000 by Emmy-winning, National Humanities medalist, and MacArthur “Genius” Fellow documentarian Stanley Nelson and award-winning writer and philanthropy executive Marcia Smith as an independent production company dedicated to harnessing the power of story-driven media as a platform for education and action. Best known for producing high-quality powerful productions for PBS and creating dynamic community engagement campaigns to ensure their reach and impact, Firelight is committed to making films about pivotal events, movements, and people in American history. Firelight has won numerous awards and enjoyed great critical acclaim, with nine films in the documentary competition at the Sundance Film Festival. Past titles include Freedom Riders, Jonestown: The Life and Death of Peoples Temple, The Murder of Emmett Till, A Place of Our Own, and Freedom Summer.

Firelight’s Documentary Lab is the largest program in the United States aimed specifically at developing the documentary projects and professional skills of emerging diverse documentary filmmakers. In 2015, The John D. and Catherine T. MacArthur Foundation awarded Firelight with the MacArthur Award for Creative and Effective Institutions, for their demonstrated creativity and impact in supporting the talents and careers of a diverse new generation of filmmakers.

Tell Them We Are Rising: The Story of Black Colleges and Universities is the second in a three-part series called America Revisited that includes The Black Panthers: Vanguard of the Revolution, which was the most watched Independent Lens program ever, and the forthcoming, The Slave Trade: Creating A New World.

About the Corporation for Public Broadcasting
The Corporation for Public Broadcasting (CPB), a private, nonprofit corporation created by Congress in 1967, is the steward of the federal government’s investment in public broadcasting. It helps support the operations of nearly 1,500 locally owned and operated public television and radio stations nationwide. CPB is also the largest single source of funding for research, technology and program development for public radio, television and related online services. For more information, visit www.cpb.org, follow us on Twitter @CPBmedia, Facebook and LinkedIn, and subscribe for email updates.

About Independent Lens
Independent Lens is an Emmy® Award-winning weekly series airing on PBS Monday nights at 10:00pm. The acclaimed series, with Lois Vossen as executive producer, features documentaries united by the creative freedom, artistic achievement, and unflinching visions of independent filmmakers. Presented by ITVS, the series is funded by the Corporation for Public Broadcasting, a private corporation funded by the American people, with additional funding from PBS, the John D. and Catherine T. MacArthur Foundation, Wyncote Foundation, and the National Endowment for the Arts. For more, visit pbs.org/independentlens Join the conversation: facebook.com/independentlens and on Twitter @independentLens.