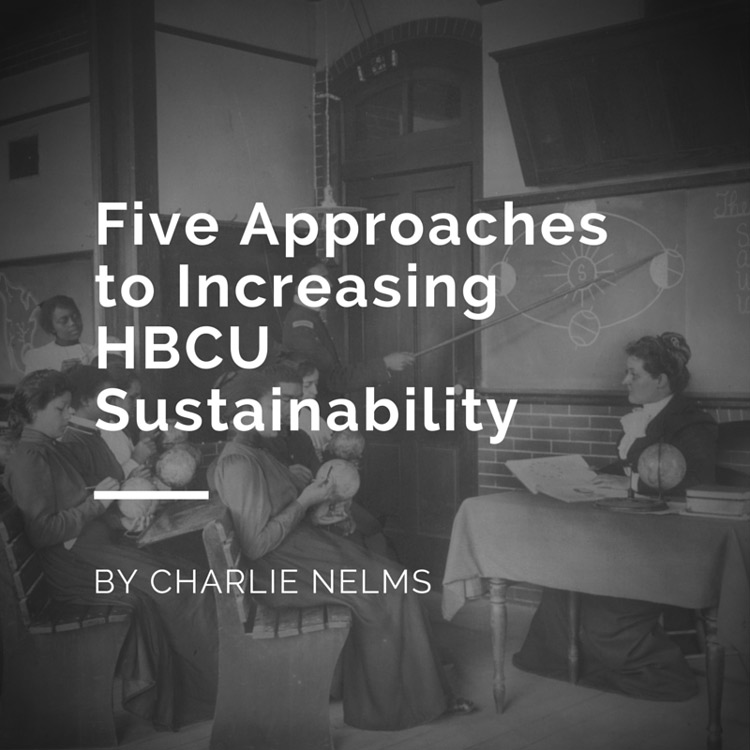 A recent Moody’s Investor Services report predicts that the closure rates of small colleges and universities will triple in the coming years—and mergers will double. Moody’s defines small colleges and universities as private colleges with operating revenue below $100 million and public colleges below $200 million. This means as many as 15 institutions a year will permanently shut their doors by 2017. What are the implications of these challenges for HBCUs?

Most HBCUs were founded in the early to mid-20th century, before the advent of technology, community colleges, and online education. They often mimicked traditional elite universities in their structure. Except for some modest changes, most HBCUs haven’t transformed themselves significantly, even though our new learners bear little resemblance to those who predominated more than a century ago.

Yet it is apparent that higher education is entering a brave new world. The contours of the past will not be sustainable in the future. This new landscape includes a declining population of traditional students; increased competition and debt levels; and decreasing state support. The keys to surviving and thriving in the face of these challenges are maintaining enrollment stability and fiscal solvency.

Although colleges and universities often wave the banner for change, few actually embrace change at a level commensurate with that is required to enhance their responsiveness and competitiveness. Enrollment stability and financial solvency are more likely if these 5 approaches are seriously considered.

In order to save and strengthen HBCUs, we need to reconsider the way we do business. Excellence in today’s world requires specialization. Instead of trying to be all things to all people, is it possible for institutions with a record of excellence in certain fields to extend those opportunities to other learners? Creating centers of excellence in such vital areas as STEM, health disparities, and the preparation of teachers is one approach that should be examined. The whole is often greater than the sum of its parts.

How many vice presidents, deans, and department chairs does an institution really need? There is nothing sacred about structure. Structure exists to facilitate goal achievement. We need to move away from traditional thinking and open our minds to shared administrative operations and services. Does each institution truly need its own assessment office, faculty development office, and architectural services?

In order for institutions to compete for students and to offer a vibrant system of support, they have often created units and services that cannot offer a full range of services in a competitive and responsive manner. To provide the comprehensive range of health and counseling services students need, is it possible to work collaboratively with local hospitals and counseling organizations? There are lessons to be learned from the outsourcing of food services and bookstores, for example, which could be extended to custodial services, housing, publication services, wellness and fitness, and technology support.

The University of Phoenix awarded more bachelor’s degrees to minority students than any other university in the country, according to a recent report from Diverse: Issues in Higher Education. With the explosion of online education, for-profit institutions, and massive open online courses (MOOCs), technology has opened new horizons for the delivery of education, which will only intensify. This will further establish an environment that will make it more difficult for many HBCUs and other minority serving institutions (MSIs) to survive.

Is it possible to create a platform that will allow multiple institutions to offer online courses and degrees without having each create its own office of online education? For example, Harvard, Stanford, the University of Michigan and other leading universities have collaborated in offering MOOCs, both partnering with entrepreneurs and companies, and also as nonprofit ventures. Online education is here to stay. Therefore, HBCUs and MSIs should consider collaborative methods for delivering online education and hybrid approaches for contemporary learners.

We need to consider mergers, at both the program and institutional level. In instances where there are multiple HBCUs within close proximity, are there prospects for program collaboration that could be more responsive to the community and region? Where two institutions each offer a criminal justice program, are there opportunities for program consolidation? Rather than everyone trying to offer every program, why not share faculty and labs if conditions for this are favorable? In considering these options, the institutions involved can retain their brand, while at the same time recognizing that program specialization is a key to excellence.

Institutional mergers are also needed in this challenging landscape of higher education. We want to hold on to institutions we once knew, even if they are no longer sustainable. In instances where colleges have gone out of business, how extensively were mergers considered? Let us look beyond the mantra of HBCU mergers, to mergers with colleges and universities generally. Most important, as we examine a set of institutions, we should be asking ourselves what is needed in the marketplace.

As colleges and universities prepare for this uncertain future, one thing is clear: we cannot keep doing what we’ve always done and yet expect different outcomes. What worked in the past is unlikely to work in the future. It is time for all of us to take stock of where we are and how best to respond to the challenges offered by new generations of learners, as well as new approaches to instruction. We need a vibrant discussion around innovative, alternative approaches that will allow us to remain competitive and responsive in this new landscape of higher education.

Those who have the privilege of serving as presidents of HBCUs must become more proactive in responding to the needs of current and future learners. The future of higher education for HBCUs will be determined more by their contemporary responsiveness rather than by their historic relevance.