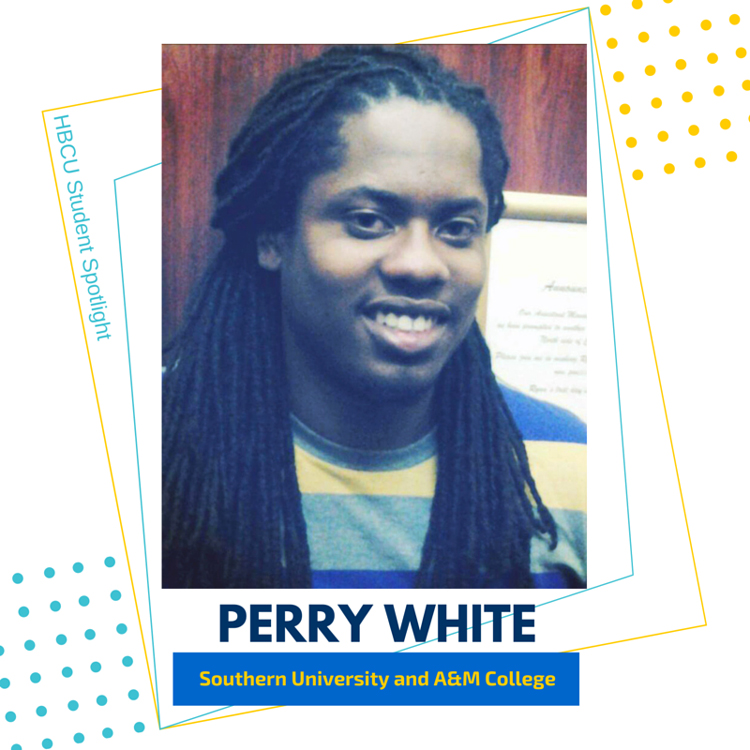 Perry White is an HBCU student who has come a long way since his humble beginnings. Today he co-directs and co-produces ‘On The Yard’ with Garrett Edgerson. On The Yard is a YouTube film series that provides the latest news and storylines around Southern University. The show which Perry hosts publishes once a week on YouTube.com and is currently in the third season.

Perry White grew up in a place called Pine Bluff, Arkansas – which is not the safest town to grow up in. It’s rated in the top 5% of US cities with the highest crime rates. Even though he spent a lot of time between Pine Bluff and Chicago as he had family there, he graduated from Pine Bluff High School. He initially attended the University of Arkansas at Pine Bluff studying biology but ultimately decided that wasn’t what he wanted to do.

After considering a few different schools, he decided to move to Baton Rouge, Louisiana to attend Southern University and A&M College. Perry ended up taking a couple of years off from studying to work so that he could qualify for in-state tuition. This way he could afford to make the payments himself without any further assistance. Once Perry began attending Southern, he decided to change his major to political science. This shift in degree was driven by his passion for community work and helping out people in areas that are less fortunate than others. He wanted to help others and as a result worked with former United States Senator Mary Landrieu on her campaign to help him achieve this dream.

“I enjoyed the opportunity because it gave me an chance to go door-to-door to be able to go into those neighborhoods, go to areas where people may not know the importance of voting or people may not know how to get things done as far as the understanding of policies and the types of laws in their area of the community,” Perry said.

Working on political campaigns taught him how to network and meet different kinds of people, which were skills that would ultimately help him in his current project.

Perry had always been a fan of sports from a young age and always knew that this was something he wanted to be a part of in some way. As a child, his mother would take him to the University of Arkansas at Pine Bluff football games.

“One year, I can’t remember if it was quite the ‘99 or the 2000 season, we had a family get together for Thanksgiving. My aunt and uncle were headed to New Orleans to take my older cousins to the Bayou Classic, so they talked my mom into letting me go as well. I was no more than probably like 11, maybe 12. When we made it to New Orleans for the classic, I instantly fell in love with Southern. It was just something about the passion and spirit their fans had that drew me in. The SU band came out and performed with Mystikal. Little did I know I was in store for one of the most memorable Bayou Classic matchups of all-time as Southern ended up winning the game on like the last play with a couple of seconds left on the clock.” he said, reminiscing about his childhood.

Over time, he ended up getting into HBCU Athletics, HBCU Football and going to more games. After being given the opportunity by Jarrett Carter the Founding Editor of HBCUDigest.com he began to write sports articles covering SWAC athletics for the HBCU Digest. Shortly after he started doing a couple of radio podcasts with Steven Gaither from HBCUGameday.com.

It was in 2013 when Jackson State and Southern University were matched up to battle for SWAC Championship in Houston, Texas. Perry got the idea to make a film that showed an in-depth view of what the HBCU culture is like during a game – the coaches, the band, the game – the entire game day. He had the vision to put out a positive image to the media to get people back interested in the culture of HBCU football. While this film wasn’t as successful as he had hoped, Perry learned some very useful skills about working with cameras such as zoom, focus and how to capture the shots he had envisioned in his mind.

About a year later, Perry decided to try doing another film project highlighting the Southern vs. Jackson State game in Jackson, Mississippi, but this time with a good friend with a lot of knowledge in the film world by the name of Kendal Odom.

“The Jackson State people gave us a tough time with field passes, but Kendal and I, we went in, we covered it. We highlighted the bands, football teams, we went in the stands, talked with fans from both schools, and even got a little trash talk”, he said.

Perry felt like this was an accurate portrayal of the game and covered the significance of what was going on. Tom Joyner and the Tom Joyner Foundation would later feature this film project. After researching what other HBCUs were doing to make sure that he wasn’t stealing others ideas or copying what they were doing, he found a show in North Carolina Central called “Eagle Access.” From that, he met Jahliel Thurman who started a show called “Yard Talk.” Finally, Perry met Garrett Edgerson, who is the head videographer for Southern University’s marching band.

After meeting Garrett, they put all of their ideas together and different skills to make the YouTube film series “On The Yard”.

“We went through season one; you could tell it was the beginning phase. We were basically just building the foundation if you want to call it that. Then we went into season two, and you could see the difference. You could see the transition, and you could see the improvement in how On the Yard was evolving, and getting better per episode. With each episode we were learning more and more about filming, producing and marketing the show to reach a wider audience”, Perry said.

They currently have achieved over 45,000 views on YouTube and counting as well as are building an increasing social media presence with 4,400 plus followers on Instagram and around 1,500 likes on the Facebook page. The social media helps them keep their name out there and reach people they may not have normally reached. Media outlets such as HBCUDigest.com, HBCUBuzz.com, Campuslately.com, HBCUCampaign.com, HBCUExcellence.com, HBCUCareerCenter.com, HBCUGameday.com, and the Tom Joyner Foundation have also featured the show.

From On The Yard, a few months ago he received the opportunity to co-host the Jaguar Journal. A radio show on ESPN Radio 104.5 FM Baton Rouge, which is dedicated to Southern University and SWAC athletics with Reggie Flood. It is the only show in the country within the ESPN Radio Network dedicated solely to an HBCU. Perry enjoys doing both the web series as well as the radio show because it gives him the chance to reach a national audience on the ESPN Radio Network and an international audience through YouTube.

“I enjoy being able to be in a position to talk about the importance of HBCU’s and to push that out there to a national audience that may not know or understand how the culture is there. I try to talk well beyond Southern and include other HBCUs from around the country and how they do things. That’s where I get my enjoyment out of it all. I get the opportunity on both sides.” Perry said.

Plans for the Future

In the future, he intends to pursue a political career but still wants to remain involved in covering sports. Moving forward he wants the film series On The Yard to become a national network for HBCUs –

“A network for HBCUs, where On the Yard is just not at Southern University but every HBCU. Pretty much every HBCU campus is called The Yard. On The Yard can go to those different schools and highlight them, to where those universities can use it as a primary tool for alumni engagement & recruiting.” Perry explains.

Watch On The Yard Season 3, Episode 3

Connect with On the Yard