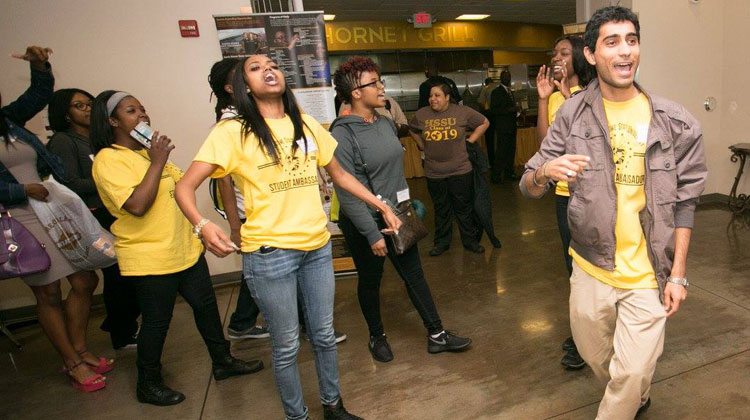 Harris-Stowe State University (HSSU) is proud to announce that it has surpassed last year’s enrollment for the largest freshman and transfer students. This year’s first-time freshman and new transfer student enrollment of nearly 600 is a more than 30 percent increase, up from last year’s 452. This highlights a two-year trend that represents a 50 percent increase over the 2014-15 academic year.

As Harris-Stowe expands capacity and establishes its position as a premier higher education institution in the region, the University fulfills a critical need in graduating a great percentage of African-American students.

“We provide an academically-challenging education at an affordable price in a thriving urban environment. Harris-Stowe is very competitive and attracts students from across the country and around the world,” said Loretta McDonald, director of Harris-Stowe’s Office of Admissions. “Harris-Stowe is continuing to develop and broaden our aggressive recruitment strategy and it is yielding great results.”

Indeed, students are coming to St. Louis to attend Harris-Stowe from 37 states and 10 countries, including China, Brazil, India, Scotland and Nigeria. This emphasis on out-state recruitment has filled the University’s two residential halls, which are at capacity for the first time. The first facility, the Rev. Dr. William G. Gillespie Residence Hall and Student Center, opened in 2006 and the Freeman R. Bosley Residence Hall opened in 2011.

“Many of our local students are even choosing to live on campus because of the broad range of academic and social activities – they enjoy an authentic HBCU college experience,” said Shawn Baker, senior associate dean of students for Harris-Stowe State University. “In addition to direct access to student activities, our residents benefit from targeted Learning Communities that are helping students excel academically.”

The increased demand for housing has led the University to become more intentional about residential programming.  Harris-Stowe has established several Learning Communities to facilitate specialized academic success for students in the following populations: Athletics, Honors College, Minority Male Living and STEM (science, technology, engineering, and math). Students with similar interests residing in close proximity help broaden their critical thinking skills and prepare them to serve as leaders and agents of change in a global society.

Over the past two years, the University has more than doubled its degree offerings, which attracts students to its most popular business and science programs.  Also, Harris-Stowe’s intimate, nurturing environment, and its 13:1 student-to-faculty ratio are other factors that attract students. Another testament to growth is the 2016 graduating class of 152 students was the 5th largest in more than 30 years.