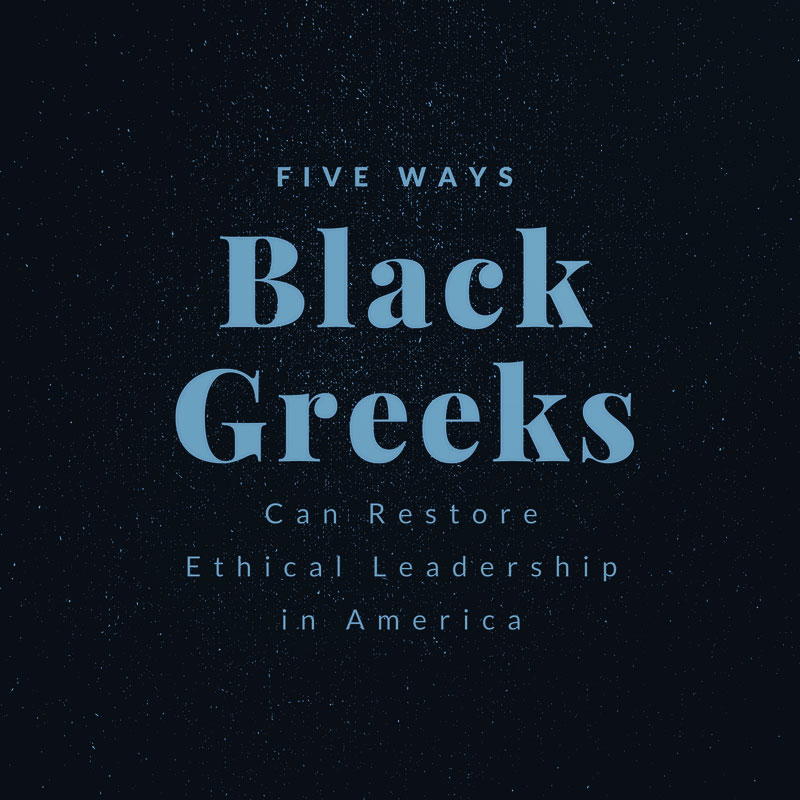 I am convinced that ethical leadership is in danger but I am also convinced that Black Greeks can do something about it. The 2016 presidential election has proven that Americans don’t have a clue. Before I go on, know that this commentary is about leadership as opposed to politics. My focus is on leadership guided by ethical standards and behavior to produce positive outcomes for communities.

Consider this. During his campaign, President-Elect Donald Trump proclaimed, “I could stand in the middle of Fifth Avenue and shoot somebody, and I wouldn’t lose any voters.” With immigration reform as a major part of his platform, Trump made the misleading claim that there are “30 or 34 million” illegal immigrants in the U.S. while researchers say there are no more than 12 million according to PoliFact. Also, Trump flat-out lied when he claimed to witness “thousands of people” in Jersey City cheering the 9/11 attacks (he later admitted that he was in Manhattan at the time). And, oh yeah, the president-elect may have benefited from another country meddling in our election. The evidence that Trump is far from an ethical leader has been there all along yet some voters were more than willing to be pimped while others (who were able) couldn’t even bother to take their trifling butts to the polls.

What does this have to with Black Greeks? African American fraternities and sororities collectively stand for scholarship, service, and love for humanity. These are values on which ethical leadership is built. I’m not encouraging that Black Greeks adopt a hero mentality but rather show the ethical leadership that has been the foundation for how we have historically affected positive change.

Black Greeks have to speak up NOW. One person who inspired me to write this is Dr. Walter Kimbrough, president of Dillard University and a prominent Black Greek. During a recent speech, he used Psychology Today’s “Anti-Intellectualism and the ‘Dumbing Down’ of America” as evidence of how thoughtlessness has compromised the public’s common sense. Although Dr. Kimbrough did not quote this part of the article, he would probably agree that the following section is critical:

We’re creating a world of dummies. Angry dummies who feel they have the right, the authority, and the need not only to comment on everything, but to make sure their voice is heard above the rest, and to drag down any opposing views through personal attacks, loud repetition, and confrontation.”

In other words, our society thinks that throwing shade is more productive than rational thought. Conversely, Black Greeks are inundated with lessons about ethical leadership during our intake processes; and our fraternities and sororities expect as much from us.

The reason this commentary is on HBCU Lifestyle is I believe college students are a valuable part of maintaining standards of ethical leadership. In his HBCU Lifestyle commentary, “Why the HBCU Mission is Critical in a Racially Divided America”, Charles Gibbs wrote, “New students coming to an HBCU campus must…realize that they are entering an environment full of intellectual vigor.” The man speaks truth. HBCUs supply students with bottomless ethical leadership perspectives through a liberal arts education. It was a liberal arts education, after all, that ironically led Derrick Black to renounce his white supremacy views. So, imagine how much good Black Greeks and those who support our values do when we use that same intellect, especially from HBCUs, to exercise ethical leadership. Here’s what you can do.

First, invest in your national programs. Consider the following partnerships and initiatives among Divine Nine organizations, for example:

There are also the efforts of Black Greeks Speak and D9 for Real Change, and keep in mind that the next midterm elections are November 6, 2018. Get involved with your programs and aggressively take those initiatives to the people by engaging media outlets and using social media.

Third, focus more on the mission than yourself. If you understand the importance of a mission, you know we just elected a textbook narcissist. When talking about reducing crime, this fool actually said, “I alone can fix it.” C’mon, son. Similarly, too many of us make the mistake of putting ourselves above our letters. Focus on your organizations’ missions as ways to be ethical leaders who serve communities effectively.

Fourth, lead strategically. Recently, I visited the Center for Civil and Human Rights in Atlanta and it was a tremendous learning experience. The biggest lesson I learned is that movements succeed because of strategy, purpose, and discipline. For example, one exhibit showed the rules of engagement for non-violent civil rights protesting such as the importance of planning and everyone agreeing to the plan as well as displaying a serious attitude to show “calm confidence.” Black Greeks have the minds to rally communities strategically, so let’s use those minds.

Last, ignite passion. Despite his blatant misrepresentation of facts, one thing I will give Trump is he did a masterful job of galvanizing his voting base. If nothing else, he gave them the impression that he would fight for them. Black Greeks already do just about everything with passion! One sister I plan to keep my eye on is Senator-Elect Kamala Harris. She has come out of the gates looking to energize her constituency.

We cannot disengage or retreat over the next four years. We must remain steadfast in our fight for justice. pic.twitter.com/uSken6xTo8

While honestly fighting for our communities, let’s do so in a way that will ignite their passion for progress.

Black Greeks are uniquely positioned to make a real difference because our organizations encourage ethical leadership for the greater good. We neither need to hold advanced degrees nor belong to the same political party to work together. We simply have to do what our fraternities and sororities expect us to do.