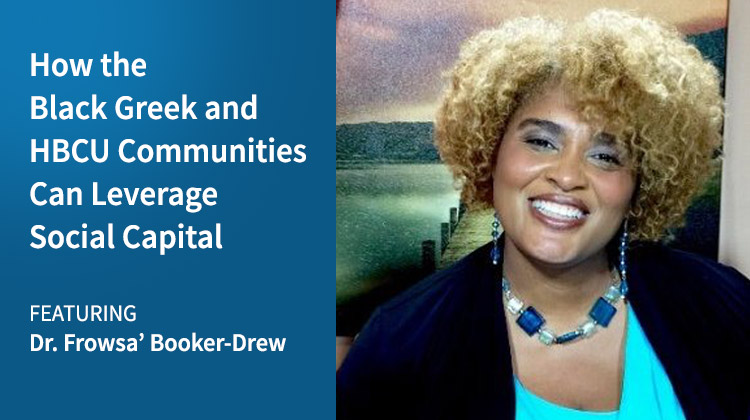 Black Greeks have a wealth of social capital and use it for good, and we don’t even realize it. For example, Kalamazoo Divine Nine organizations teamed up with community partners to award scholarship dollars. In New Haven, the Omega Psi Phi and Alpha Phi Alpha chapters collaborated on an education forum. Even my interviewing my wife, a Zeta Phi Beta member, to discuss fundraising strategies for HBCU alumni associations on the HBCU Lifestyle Podcast is effective use of social capital. But what exactly is social capital?

Although a formal definition of social capital points to utilizing a social network to gain access to opportunities and resources, it’s more about relationships and resources according to Dr. Frowsa’ Booker-Drew. When I first heard the term, I immediately thought of examples such as Ivy League alumni from elite families having access to the nation’s wealth. Froswa’, however, recognizes that social capital is more about society than capital. So any group can benefit from it. Not only that, she recognizes how social capital can benefit the community as a whole.

Froswa’ (pronounced frohz-WAH) looked at how social capital works among people of color for her doctoral research. Her research showed that while people look at social capital as transactional relationships, those transactions do not exist without people relating to each other’s’ stories. She is an Alpha Kappa Alpha member who has taught at HBCUs so I thought she would be the perfect person to discuss how Black Greeks and the HBCU community can get the most out of their social capital.

I interviewed Froswa’ on my podcast and here are some paraphrased parts of our conversation that stood out:

Eddie:  It seems obvious but how do you see members of the Black Greek community benefiting from social capital?

Froswa’:  One of the most powerful things that’s going to create relationships is stories. When we Greeks are doing our conferences and getting together, we’re trying to get a goal done and do community service along with other things. So I don’t know if there’s always the time for people to tell the stories. And that’s what brings people together; because in those stories you develop trust which makes sense when people pledge because you’re talking about this intense time you’re getting to know people, telling stories, and spending time together. And so there’s this bond created because of the stories that we’re sharing about our lives. I think we are so busy trying to build that we have created a community that does not take the time to reflect until something happens.

Eddie:  So, how realistic are these expectations that we put on ourselves or the expectations that others put on us? In other words, let’s take the typical college Greek who is probably not only active in his or her chapter but probably president of this union, probably vice president of that organization, and probably active in the community. Would you say maybe what happens along the way is that student becomes a professional and loses his social capital in Greek life because he’s just tired?

Froswa’:  That happens! And keep in mind that for a lot of folks who are graduating, it’s the amount of debt that they end up walking out of school with. And so your focus shifts from how do I continue these relationships to how do I pay my mortgage? We have to give ourselves permission to move on because our networks are going to change and grow and evolve. But I think that you can’t diminish the value of those relationships and those experiences in shaping who you are. I think sometimes it’s knowing your paths are going to go in different directions and that’s okay. Give yourself permission to do that. But don’t forget your relationships because that’s not a good thing to do. Because when you do that, you’re diminishing the story.

Froswa’:  So that’s why it’s important to think about identity because we allow things to define us. I remember talking to a group of women. I asked them to go around the room and tell me who they were. People started telling their titles and I said, “Yes but let’s take that away. Who are you, really?” And people started crying and breaking down, and sharing very painful things. And I often ask people, “Do you have a personal mission statement? Because if you don’t, you’re going to always be defined by what you do.”

I think for many people we’ve bought into this definition of success which is someone else’s definition. It wasn’t created for us to begin with. Our identities are tied to the stories we tell about ourselves. And we don’t even realize that those stories are either what connect us to people or destroy our relationships. So I think it’s important for people to pay attention to stories and life cycles. You can’t allow a title or a job to define you. You have to find out what your personal mission statement is. You have to know what your triggers are so you don’t repeat the same stories over and over again. So to get through this proving piece, you’ve got to be confident in who you are, where you’re going, and where you’ve been.

Froswa’:  Yes, I went to a PWI but I taught at HBCUs. And, to your point, I noticed years ago that the alums were not as involved but I’m seeing that alums are coming back for the students. So it’s interesting that people have tried to do things for harm but it’s actually been for good. Because you’re seeing people come back and put their arms around their schools, teaching or being heavily engaged. And I think the environment that we’re in is requiring us to have that level of engagement that we didn’t have before because we were too busy chasing this ideal of success. So you’re seeing some trends that are new but you’re also seeing folks doing things that worked in the past.

Eddie:  How can a young mind, whether it is that of a Black Greek or an HBCU student, recognize the value of social capital?

Froswa’:  When you’re young, that’s the best time to do it. I always give this example of when I was in college. I was volunteering because somebody would ask me to do something. And I was thinking, “This isn’t that important.” But I had no idea that people were watching me. I took a job out of college, and on my first day of work I got hit head-on and knocked into oncoming traffic. After I got home from the hospital, I got a call from these people who had been watching me and they offered me a job. I became an assistant director of a state program at 21-years-old! Well, part of that was having all of these roles in college but it was also the relationship I built with these people. And I didn’t just do what they asked me to do. I got to know them and wanted them to see that I was trying. It’s amazing that, after all these years, the lady who hired me is now my friend. The fact that I was intentional about keeping the relationship is why we continue to help each other.

So, for young people, I always say find a mentor. Find someone who is living in the world the way you want to live in. And you don’t need folks who are just going to say yes. You need folks who are going to challenge you and make you accountable. So I think it’s finding people who are going to help them be all that God has placed in them to be, and college is the perfect time to do it. And recognize that people are going to be intimidated by your youth but don’t allow that to stop you. I remember having people who I just wanted to be around and they didn’t have the time for me. But I vowed I would not be that kind of person because I realize how relationships transformed my life and opened up doors that I would not have had access to if I had not started building a network young.

To hear this interview in its entirety, click here.