You are here: Home / Alumni / A Love Letter to Cheyney University 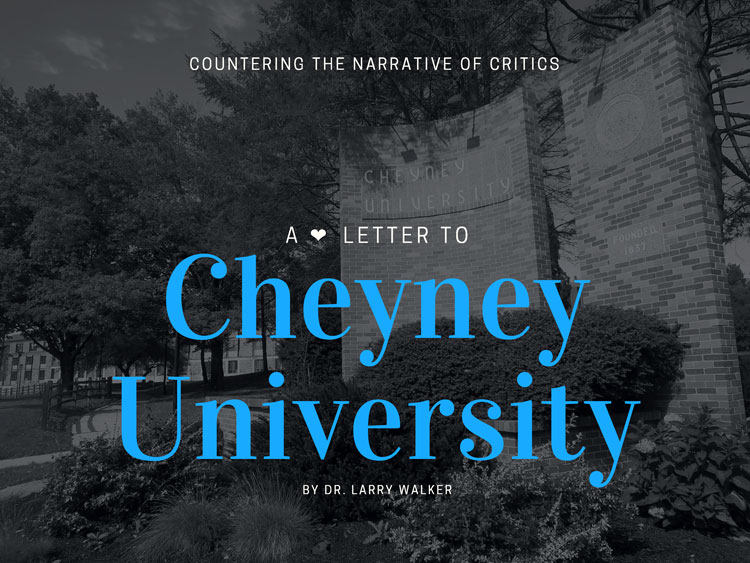 Over the last several years pundits have suggested your demise is eminent. They believe you are faced with an insurmountable debt that cannot be repaid to the state or federal government. Consistently experts highlight your low five-year graduation rate and shrinking student population. Unfortunately, the anti-Cheyney University movement is consistent with the challenges other HBCUs have encountered. For instance, Morris Brown College fell victim to historical inequities and mismanagement that forced administrators to shudder their doors. Recently the calls for dramatic changes at Cheyney have intensified. A recent report from a task force outlines a series of recommendations that would dramatically alter the university. In addition, whispers that the university will be merged with a predominantly White institution (PWI), West Chester University continue to persist. Although some politicians and supporters have suggested that Cheyney and West Chester will not become a singular institution, the troubling rumor began long before I matriculated at Cheyney. Considering all the barriers you have to overcome I worry about your future.

I am writing this letter because despite the rhetoric surrounding the future your role in today’s society is vital. Historically Black colleges and universities (HBCUs) are the heart and soul of the higher education system. The nation’s ability to educate a productive and diverse workforce is inextricably linked to HBCUs success. Throughout their history, HBCUs have educated and supported students that society disregarded. You have nurtured thousands of students including me who have become scientists, teachers, lawyers, researchers, physicians, and dentists. People focus on your struggles without acknowledging your contributions to the country. Historically you have done more with less. Since your inception, students struggling to navigate society’s pitfalls found a home on a scenic campus in Pennsylvania.

Several years ago you welcomed an African-American male from Philadelphia seeking a path to success. Similar to other HBCUs you understood that standardized test scores or high school transcripts did not paint an accurate picture. You examined me closely and opened your gates to give me an opportunity. Without your faith and the support of numerous administrators, faculty, students, and auxiliary staff my future was cloudy. During my time at Cheyney when I faltered, you allowed me to correct my mistakes. When I lost faith in my abilities, suffered a personal loss, or struggled under the weight of systemic racism you eased my concerns. My story is not unique. During homecoming alumni retell stories that highlight why we care for you so deeply.

Writing this letter is painful but therapeutic. Listening to people predict your future without understanding the significance of the school song is difficult. Thus, it is important to create a counter narrative to challenge critics. Frequently they suggest that alumni and supporters are not taking steps to address a series of problems. This is inaccurate. Cheyney advocates have taken several steps including: 1) Heeding Cheyney’s Call, led by Michael Coard has taken legal action to remedy the state’s refusal to consistently abide by an agreement with the U.S. Department of Education; 2) Cheyney University’s National Alumni Association (District of Columbia, Maryland and Virginia chapter) held a fund raiser attended by hundreds of people; 3) Cheyney University Foundation sponsored a fundraiser in Philadelphia to help students pay for college and 4) advocates have taken steps to galvanize supporters.

The efforts I have outlined in this letter are only a few steps we are all taking to ensure your future. Quietly some alumni and advocates are working with business leaders and experts to develop a comprehensive plan to protect the university’s valuable legacy. Proponents of HBCUs realize that if the nation’s oldest institution of higher learning closes several schools could follow over the next few years.

Closing your doors is not an acceptable alternative to watching you flourish for the next generation of scholars. Honestly, I couldn’t cope if your gates were permanently closed and my past was slowly blown away. While I believe in your future, I’m not an idealist. Changing the university’s current trajectory will require difficult choices. I hope that Cheyney can survive and thrive like HBCUs including Paul Quinn College in Texas. However, the institution needs a permanent leader with a bold vision and support from stakeholders. The university’s future cannot be made in closed door sessions without input from alumni with a vested interest in the path forward.

While I realize the conversation is frightening. It’s important you understand we won’t give up on your future and promise. Thousands of students have walked your hallowed halls and benefited from immense support from the Cheyney family. You are a crown jewel that has to be protected at all costs. I hope that after reading this letter you feel reinvigorated. Hold your head high and let’s work together to address every issue. I look forward to visiting soon.