You are here: Home / HBCUs / From Lambs to Rams: WSSU Welcomes Largest Freshman Class Since 2008 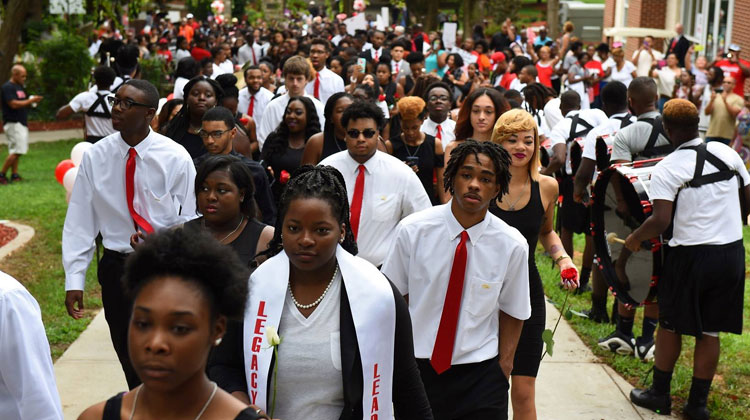 Winston-Salem State University has welcomed 950 new first-year students this fall – the largest incoming class since 2008 and an increase over last year’s freshman class of 887. Those students began their college experience on Sunday, Aug. 14 at WSSU, with the kick-off of the university’s week-long fall orientation program known as “Ramdition.”

The 2016 version of Ramdition was reimagined based on the values stated in WSSU’s new Strategic Plan. These core values — student-centeredness, excellence, stewardship, integrity, social justice, and trust – were used as the foundation to build each activity.

“This is the first class to enter Winston-Salem State University under the new strategic plan,” said Brenda Allen, provost and vice chancellor of academic affairs. “WSSU’s values are essential not only for a successful academic career, but for a successful life. My hope is that students will internalize these values and form an affinity toward the concept of a liberal education.”

Ramdition began with a Welcome Session on Sunday, Aug. 14. Where, students had an opportunity to meet members of the University’s administration and were placed in groups, each led by student mentors. Students were also assigned an academic success counselor, who advised them on their course selection and assisted them in registering for their fall classes. Throughout that week, students will also learned about liberal education, navigating the classroom, the tenets of social justice, and much more.

Ramdition week concluded on Saturday, Aug. 20 with Through the Archway: A Rite of Passage Ceremony. During the ceremony, students participated in a processional – led by the sophomore class, the Student Government Association, and Chancellor Elwood Robinson – through the stone arches on campus in an event that symbolizes their transition from “lambs” to “Rams.” Along the processional route, students were greeted by faculty, staff, administration, and their families. Additionally, alumni cheered for students along the route with signs displaying their graduation year. The ceremony was be followed by a Family Day Cookout and an opportunity to meet the student-athletes participating in fall sports.

The WSSU Ramdition tradition began in 2009 under the leadership of the late Michelle Releford. At the time, Releford served as the Dean of University College. In a 2009 letter to the new fall class, Releford stated that Ramdition was specifically designed for students’ education and enjoyment. This experience will help new students to connect early and successfully to a number of campus resources.

“While Ramdition has adhered to its original tenets, it has managed to evolve through the years by staying relevant in an ever-changing, diverse, and complex global society,” said Kathy Stitts, associate provost, and dean of University College and Lifelong Learning. “We’ve incorporated curricular and co-curricular programming in varying formats to provide students a more holistic Ram experience.”