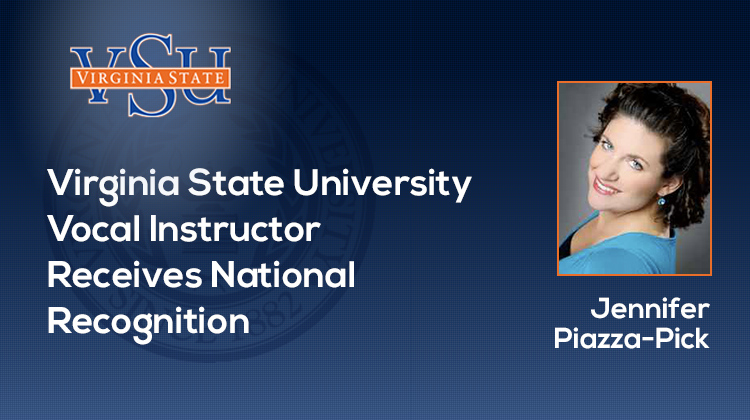 A Virginia State University vocal instructor, Jennifer Piazza-Pick, was recently named one of three winners of Hawaii Public Radio’s Art Song Contest.  She will be featured on HPR-1’s program, Singing and Other Sins, in December.

During the program they will play a 20-minute recording of Piazza-Pick singing a short art song recital.  An art song is a vocal music composition, usually written for one voice with piano accompaniment, and usually in the classical, art music tradition.

Piazza-Pick is also the recipient of the George Cortes Award for Classical Singing by the Artist Foundation of San Antonio and was a finalist for the American Prize in the women’s art song division.  This past summer, Piazza-Pick was the cover for Susanna in The Marriage of Figaro at the Princeton Festival in Princeton, N.J. and she sang with the Berwick Chorus of the Oregon Bach Festival in Eugene, Ore.

Piazza-Pick joined VSU’s Department of Music in fall 2014. She holds a master of music degree from University of Cincinnati and many years of experience as a music teacher. A world traveler and a woman of distinction, Piazza-Pick has been engaged in music since she was a child.  Her father played the Hammond Organ while growing up and her mother played the flute and sang in church.  As a child Piazza sang, danced, and played the flute for ten years.

“Music was a hobby,” said Piazza-Pick. “Music was just something that happened for me.”

“I’m really enjoying it at Virginia State, I have fantastic colleagues and wonderful students. I’m seeing a lot of improvement and a lot of growth in our musicians, I’m very excited about it,” said Piazza-Pick.

Teaching is second nature to her. Prior to arriving at VSU, Piazza-Pick taught music at an elementary school in Long Beach, Calif. and at several universities in San Antonio Texas, including Our Lady of the Lake University, Trinity University, and the University of the Incarnate Word.  She currently teaches at the Academy of Music at Grace Baptist Church and maintains a private voice studio.  Piazza-Pick sings at several churches in Richmond, Va., and will join the sanctuary choir for the Compline services at Saint Stephen’s Episcopal Church where she will record lessons and carols for WCVE’s Christmas Eve performance.

Piazza-Pick, a soprano, has been active in concerts, oratorio, and opera in the United States and Europe.  She was a member of the House Chorus at the National Theater Mannheim in Mannheim, Germany for five years, where she performed in over 50 different productions.  She has also performed with Long Beach Opera, Ithaca Opera, Cincinnati Opera, Pacific Chorale, Opera Piccola of San Antonio, Opera Theater of Lucca, San Antonio Chamber Choir, and Alamo City Ballet.