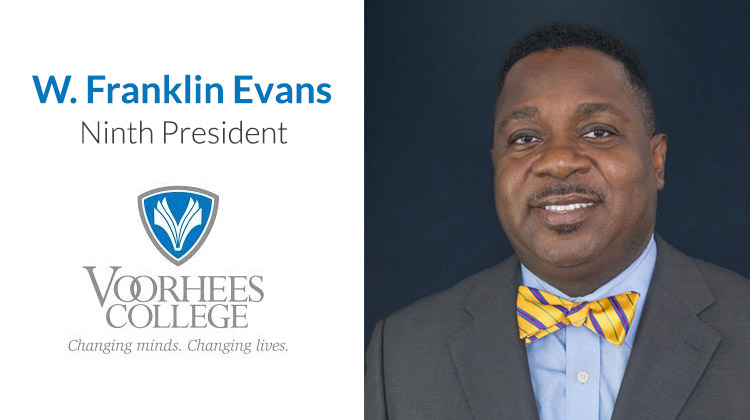 Prior to being named the President of Voorhees College, Evans served as the Interim President of South Carolina State University SCSU, in Orangeburg, SC, where he also served as the provost and chief academic officer.  Evans is well versed in many areas, these include leadership and supervision in all academic programs and curriculum development, faculty recruitment, enrollment management, strategic planning and the accreditation process.

Under his leadership as interim president of South Carolina State University, enrollment exceeded its goal and fundraising increased by 687%, alumni support also improved and the University achieved a balanced budget.

Evans has been in the education arena over 25 years.  He served as the Vice President of Academic Affairs at Virginia Union University in Richmond, VA where he was instrumental in leading the institution through a successful reaffirmation of accreditation and establishing an Honors College, a Bachelor of Arts Degree in Fine Arts and a Master of Education degree.  He also worked at Elizabeth City State, J. F. Drake State Technical College, and Tennessee State University.  He is also an experienced fundraiser and grant writer.

Evans is considered a highly skilled administrator, professor, and K-12 practitioner, having worked in the Metropolitan Atlanta area as a high school teacher, department chair and principal.  He has conducted numerous faculty development workshops and served as a mentor and coach.

Currently, Evans is active in many organizations such as the NAACP, Black Family Preservation Group, the National Association of Black School Educators, Toast Masters International and Alpha Phi Alpha Fraternity, Incorporated.  He has served on the boards of the Sickle Cell Association, Boys and Girls Club, Kiwanis Club International and the AIDS Action Coalition.

Evans, who enjoys traveling, playing tennis, cooking, reading and singing, hails from a long line of educators.  His grandfather was a principal, and his mother, uncle and several aunts were teachers.  After being strongly encouraged by his supervisor, Evans pursued a career in K-12 administration.  He chose a career in higher education because he wanted to effect change in the education of young black children by training those who would eventually educate them.

Evans believes that Voorhees, though small, is a solid institution that has impacted the lives of many individuals who have become trailblazers, and can still do so today.  Like any institution, Voorhees will face challenges, such as enrollment and fundraising, but the baton has been passed and he is ready and willing to continue the race of excellence.

St. Clair P. Guess, chairman of the Voorhees College Board of Trustees, stated “It is my sincere pleasure to announce the selection of Dr. W. Franklin Evans as the next president of Voorhees. Dr. Evans possesses a wealth of experience in administration and education that expands decades.    His professionalism and firm leadership skills make him a dynamic choice as the successor to Dr. Sellers, and I am secure in the knowledge that with him leading the charge, Voorhees will achieve unparalleled success as it forges into a bright and exciting future.”

Dr. Cleveland L. Sellers, Jr., immediate past president of Voorhees stated, “I have passed the torch to the very capable Dr. Evans.  The circle is complete, I graduated from then Voorhees High School in 1962, and now I am retiring from Voorhees College. We have accomplished many things during my tenure, including building a new living learning facility.  I am confident that Dr. Evans will leave his mark as well.”

Evans is eager to begin his tenure at Voorhees and continue in the triumphant footsteps of his predecessors.

“I am extremely honored to have been selected to take over the helm at Voorhees College.  The baton has been passed by Dr. Cleveland L. Sellers, Jr. and I am both excited and humbled to continue the race towards excellence that he has forged.  Voorhees has a strong historical background and a legacy that must not be ignored.  In 1897, Voorhees College founder, Elizabeth Evelyn Wright, set a standard for excellence in education, and we must honor that legacy by ensuring that the next generation of leaders receive the highest possible quality of education.”