Norfolk, Va.— Tony Atwater began his tenure as Norfolk State University’s fifth president on July 1. Atwater, former president of Indiana University of Pennsylvania and Senior Fellow at the American Association of State Colleges and Universities, was chosen as president on April 22 by the NSU Board of Visitors.

“Atwater’s impressive record as a president, senior administrator and teacher/scholar is a remarkable match of the presidential profile developed in conjunction with the larger NSU community,” said NSU Rector Edward L. Hamm, Jr. “Atwater has been charged by the NSU Board of Visitors to lead the operations, growth and visionary planning for the university, while maintaining the wonderful spirit that has always resounded at NSU.” 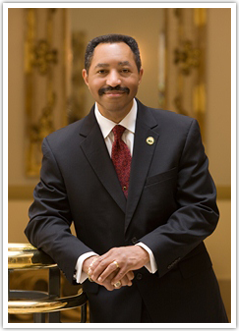 Upon accepting the NSU Board of Visitors’ appointment, Atwater expressed his gratitude to Rector Hamm and board members for their confidence in his future leadership and stewardship of Norfolk State University. “I pledge my best efforts to work collaboratively with all sectors of the university to advance NSU to the next level of academic excellence and national distinction,” said Atwater. “I look forward to serving the students, the faculty, staff and administrators of this excellent university.”

Atwater served as president of Indiana University of Pennsylvania from 2005-2010. IUP is a larger doctoral state university and is reportedly the largest university in the Pennsylvania state university system. Atwater, who guided IUP to a host of accomplishments – academically and financially – brings approximately 20 years experience as a senior administrator.

He also increased enrollment while significantly increasing fund raising and capital construction. Additionally, he diversified the student body while increasing the percentage of faculty with terminal degrees and extending its record of being nationally recognized in both US News and World Report and the Princeton Review.

In his prior assignments, he significantly increased graduation and retention rates, as well as SAT scores. Atwater’s prior comprehensive experience in fund raising, enrollment growth, academic affairs, major capital projects and student services is an enormously positive portent for the present and future of Norfolk State.

Atwater, who is 59, has held previous administrative positions, such as provost and vice president of Academic Affairs at Youngstown State University; dean of the College of Professional Studies and Education at Northern Kentucky University; associate vice president for Academic Affairs at the University of Toledo and chairman of the Department of Journalism and Mass Media at Rutgers University (New Brunswick, NJ). Prior to his teaching and administrative career in higher education, he worked as a broadcast journalist on television and at radio stations in Roanoke and Lynchburg, Va.

Among his other professional achievements and honors, Atwater served as president of the Association for Education in Journalism and Mass Communication, and he is a Ford Foundation Post-doctoral Fellow. He also completed post-doctoral study in higher education administration at Harvard University’s Institute for Educational Management. He has published more than 30 articles in scholarly journals in his expertise, news selection behavior of the mass media. Atwater is a Paul Harris Fellow of Rotary International and is the recipient of the United States Army Commander’s Award for Public Service, the highest civilian service award given by the U.S. Army. He was the recipient of a nationally competitive doctoral fellowship at Michigan State University and was awarded a nationally competitive higher education administrative internship at the University of Connecticut. He is a member of the board of directors of the International Student Exchange Program, the world’s largest student study abroad organization. In 2008 and 2009, Atwater was formally recognized as one of the Top 100 Business Leaders in Pennsylvania awarded by Pennsylvania Business Central.

A native of Nashville, Tenn., Atwater holds a Ph.D. in communication from Michigan State University. He subsequently completed post-doctoral studies in the Department of Communication at the University of Michigan. He also holds a bachelor’s degree in mass media arts from Hampton University and completed coursework toward a master of arts degree in education at Virginia Tech.

Atwater is married to Dr. Beverly Roberts-Atwater, a native of Jacksonville, Fla. Dr. Roberts-Atwater is a board-certified physician, specializing in physical medicine and rehabilitation. She is president and CEO of Quality Healthcare Services, and holds a Ph.D. and medical degree from Michigan State University. Dr. Roberts-Atwater currently serves as the Medical Director of Hillside Rehabilitation Hospital in Warren, Ohio. She will join Atwater in Norfolk.

Founded in 1935, Norfolk State University is located in Norfolk, Va. It is a comprehensive four-year, co-educational, urban institution. The university’s mission is to provide an affordable, high-quality education for an ethnically and culturally diverse population, equipping them with the capability to become citizens who continually contribute to a global and rapidly changing society.