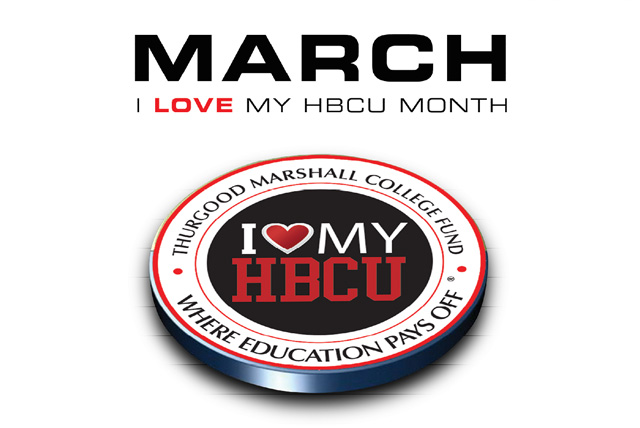 National “I Love My HBCU” Month will be an annual month-long celebration of Historically Black Colleges and Universities (HBCUs). In 2012, TMCF began the process of formally establishing the month of March each year as a period to increase awareness and appreciation of HBCUs in the United States and to unite HBCU communities nationwide with the pride and life-long connections.

“HBCUs are an integral part of our country’s higher education system and history of African Americans,” said Taylor. “I Love My HBCU Month will shine a light on these great institutions and the impact they make in preparing future leaders of tomorrow.”

“I Love My HBCU” Awareness Month will be observed nationally during the month of March in remembrance of many important people and events in the HBCUs history as well as to highlight contributions HBCUs have played in shaping its graduates. The Thurgood Marshall College Fund created and owns the theme, slogan, resources and materials for the national “I Love My HBCU” campaign. Each year, with assistance from HBCUs, students, alumni, fraternities, and sororities and other HBCU supporting organizations nationwide, TMCF will coordinate activities to raise awareness about the month and its significance.

“Our HBCU founders had the foresight to build such great institutions for African American students that have continued to produce noted public figures from the first African-American U.S. Supreme Court Justice, to four-star generals and congressmen to prominent CEOs,” said Taylor. “It is only fitting for TMCF to launch such an annual awareness campaign to honor Historically Black Colleges and Universities.”

For more information on the TMCF National “I Love My HBCU” Month or for participation, marketing materials, etc. visit https://www.thurgoodmarshallfund.net/ilovemyhbcu.

About the Thurgood Marshall College Fund
TMCF is named for the U.S. Supreme Court’s first African-American Justice. Established in 1987, TMCF supports and represents nearly 300,000 students attending its 47 member-schools that include public Historically Black Colleges and Universities (HBCUs), medical schools and law schools nation-wide and in the U.S. Virgin Islands. Through its scholarships and programs, TMCF plays a key role in preparing the leaders of tomorrow. TMCF is a 501(c) (3) tax-exempt, charitable organization. For more information about TMCF and its initiatives, visit www.ThurgoodMarshallCollegeFund.org.