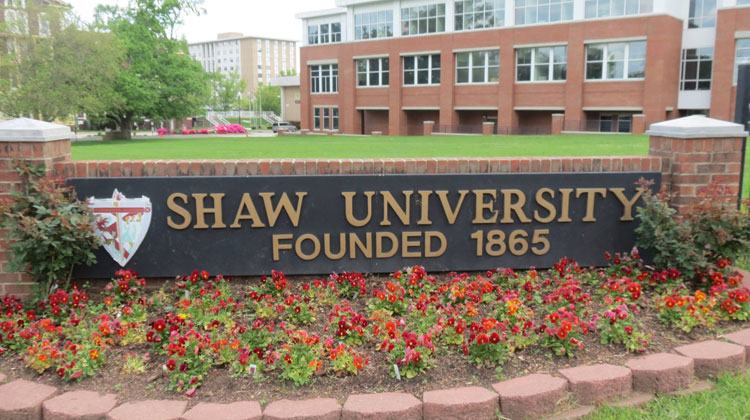 “To my Class of 2020, I have been eagerly awaiting this day,” Shaw President Tashni-Ann Dubroy told the crowd filling seats underneath a double-tent. “You have no idea how excited I am about all the wondrous accomplishments that I know are forthcoming.”

Tre-Asia-Niq Allen feels the excitement too. “I’m going to do good,” the 18-year-old said, adding she was sold on Shaw after an “interesting” visit with a university recruiter at her high school in Salisbury. “I have to do it one way or the other. I’ve got to make it out. I have to show people I can do what they thought I couldn’t do.”

Allen’s grandmother blended in with other parents and grandparents who milled around campus, looking as curious as their offspring about their new surroundings. Dorothy Allen, however, was no novice. “I’m used to it,” she said. “This is my third grandchild to go off to school, so I’m not going to cry. I’m only two hours away, and I know I can always come to see my granddaughter.”

“The incoming class is the first I will see blossom from young adults into global change agents, who leave our campus to create significant social impact that makes our world a better place,” said Dubroy, who celebrated her one-year anniversary at the university’s helm August 1.

Dubroy credits the shattered records to the university’s enrollment management team, which funneled an unprecedented 9,000 applications. She also notes an intentional effort to use technology to drive the recruitment process. Not only were students able to apply online, but the “robust online portal” also made it possible for transcripts to be electronically uploaded and opened lines of communication between Shaw and high school guidance counselors across the globe, she said. Response to notifications was significant, Dubroy added.

“We’re thankful,” said Anthony Brooks, Shaw’s Chief Enrollment Officer who joined Shaw in September 2015. “Shaw deserves it. It’s the oldest HBCU in the South, and over the years has earned a reputation for being a top producer of minority professionals. This year’s enrollment is proof we are continuing that legacy and keeping that promise for generations to come.”

China Adams learned all she needed to learn about Shaw through its online portals from her home in Charleston, SC. “It’s a good school,” she said while resting with her family during move- in day. As she looked towards the center of campus bustling with students, parents and activity, from hoisting boxes to grooving to music, she seemed to imagine herself at home.

I’m both excited and nervous,” said Adams, 18. “I’m nervous about being in new surroundings and excited about continuing my education, about entering a new level of school.”

Adams and her new classmates are entering a new Shaw that has gone through a summer of restructuring and transformation. Along with those changes, Dubroy announced in July the reinstatement of faculty and staff pay after having instituted a salary reduction initiative requiring temporary five to seven percent and ten percent pay cuts to boost financial sustainability.

“It’s not that Shaw University intends to bloat its expenditures,” Dubroy said. “We are actually using some of the cost-savings to reinvest in our faculty and staff because in Shaw’s most dire time of need, they invested in us.”

“This couldn’t be a more perfect backdrop,” Dubroy said, as she welcomed new students and start a new academic year. “This is one of our biggest days,” she said. “It’s really about energizing the base and getting everyone excited about the sequel, EPIC Pt. 2, the second year of EPIC VISION 2020. We’re turning the corner.”

That’s what Michael McMillian seeks from Shaw: “Growth and experience,” said McMillan, 18 and a graduate of Durham’s City of Medicine Academy. “It’s a Historically Black College, and it has great classes in the field I’m interested in – psychology.”