You are here: Home / HBCUs / The 2015 Home Depot RETOOL YOUR SCHOOL Winners 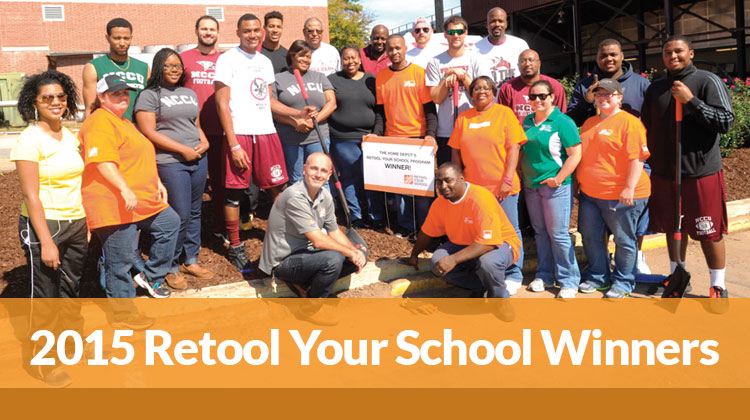 The Home Depot, the world’s largest home improvement retailer, recently announced the winners of this year’s RETOOL YOUR SCHOOL Campus Improvement Grant Program. This program, established in 2010, provides support for campus improvement projects at Historically Black Colleges and Universities (HBCU’s) across the country and has awarded $1.2 million dollars in grant money to date to HBCU’s.

Here are the 2015 Home Depot RETOOL YOUR SCHOOL Winners

“This has been one of the most exciting years for The Home Depot’s Retool Your School program thus far,” says Melissa Brown, senior manager –marketing, The Home Depot. “The HBCU community and beyond showed their unrelenting support for our HBCU’s and this program. We began with 55 HBCU’s submitting their proposals and now we have determined the winners. The Home Depot proudly congratulates all of the 2015 grant recipients.”

Online voting began February 27, 2015 and ended April 20, 2015. During this period, HBCU supporters cast one vote per day per device for their favorite participating HBCU. Supporters also secured votes for their school by using the designated hashtag for each school via their social media channels. Each use of a school’s Retool Your School designated hashtag counted as one social media vote.

About The Home Depot

The Home Depot is the world’s largest home improvement specialty retailer, with 2,270 retail stores in all 50 states, the District of Columbia, Puerto Rico, U.S. Virgin Islands, Guam, 10 Canadian provinces and Mexico. In fiscal 2014, The Home Depot had sales of $83.2 billion and earnings of $6.3 billion. The Company employs more than 300,000 associates. The Home Depot’s stock is traded on the New York Stock Exchange (NYSE: HD) and is included in the Dow Jones industrial average and Standard & Poor’s 500 index.