You are here: Home / HBCUs / Presidential Politics, The Black Vote and HBCUs 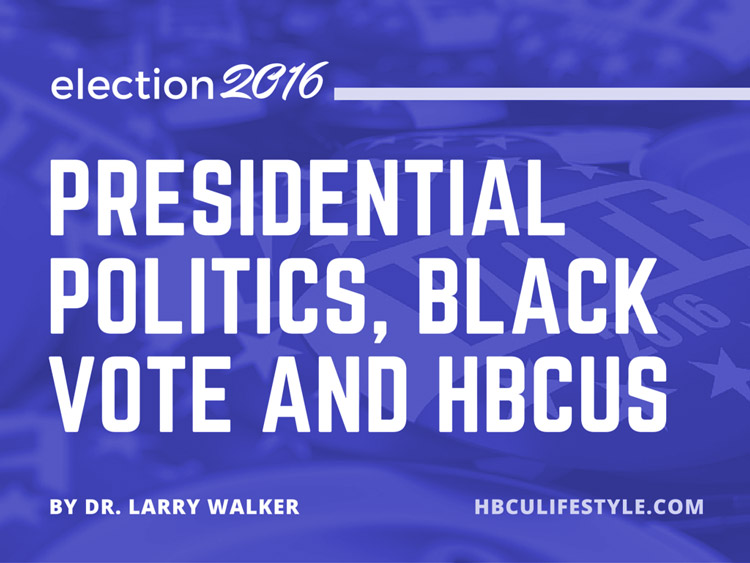 On November 4th 2008 the Black community celebrated after the nation elected its first Black President. President Obama’s election in 2008 and subsequent reelection in 2012 changed the political landscape. Today, presidential candidates once again are vying for the Black vote to win key states. Before the November election Democratic and Republican candidates continue to travel throughout the United States highlighting their platforms on foreign policy, community policing, immigration, taxes, and education. Recently, the Democratic hopefuls former Secretary of State Hillary Clinton and Senator Bernie Sanders clashed over their higher education platforms, specifically, how they impact HBCUs.

Thus far, advocates, pundits and political surrogates have argued over the value of each Democratic candidate’s higher education platform. In contrast, the current Republican candidates have not discussed in detail the history, importance or future of HBCUs. This may change as the march to November continues but Secretary Clinton and Senator Sanders have spent considerable time discussing HBCUs on the campaign trail and during town hall discussions/debates. Analyzing each candidate’s positions on HBCUs is critical considering the plight of institutions located in Louisiana and Illinois. However, before taking a deep dive into the details it’s important to highlight reasons why HBCUs are a hot topic of discussion. There are four primary reasons both Democratic candidates have to take time to woo HBCU supporters including:

Candidates respond to groups with political capital and most recognize the importance of the Black vote in the November election. Some advocates may argue that the candidate’s interest in HBCUs is superficial but because they are at the center of the Democratic education debate we may save several schools. However, ensuring HBCUs remain viable will require a closer examination of Secretary Clinton and Senator Sanders higher education platforms.

It’s important to remember that the majority of candidate’s policy proposals will not become law because of political rancor. The partisan divide could make it difficult to pass critical legislation. Elections in the House and Senate will help determine, which issues are prioritized. Below is a closer look at how Secretary Clinton and Senator Sanders’ high education proposals could impact HBCUs:

Senator Bernie Sanders– proposes to make tuition free at public post-secondary institutions. The proposal is important because of the funding problems some public HBCUs encounter in states with large university systems. Each year students drop out of school because of variety of problems including the lack of money. Senator Sanders plan would allow public HBCUs to aggressively recruit Black students at the margins; students from low-income families with talent but with limited financial or emotional support.

The Sanders plan seeks to cut student loan interest rates and increase funding for federal work-study. Students would have the opportunity to supplement their family income through work-study while completing their degree. New funding for HBCUs could increase retention rates for students with limited resources.

Overall each plan offers funding that could help HBCUs. Considering the importance of the Black vote discussing issues including HBCUs, economic development, education, and community policing is critical. We have to ensure candidates support efforts to protect public and private HBCUs. It’s important to remember the future of some HBCUs is tied to making the right decision during the primaries and election in November.