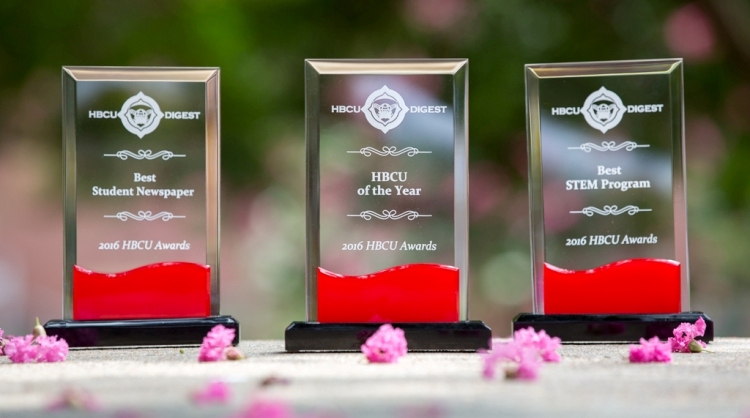 North Carolina Central University (NCCU) was honored as the 2016 HBCU of the Year by HBCU Digest during the annual awards contest recognizing achievement among the nation’s 111 historically black colleges and universities.

NCCU’s Biomanufacturing Research Institute and Technology Enterprise, known as BRITE, also was named as the Best STEM Program, and the Campus Echo won in the category of Best Student Newspaper.

The HBCU Digest Awards were presented July 15, 2016, in Washington, D.C., at the University of the District of Columbia. A panel of former and current HBCU presidents, alumni, faculty, students, journalists and former award winners served as judges.

“This is truly a tremendous honor,” Chancellor Debra Saunders-White said at the presentation in accepting the award. “North Carolina Central University strives for a goal of Eagle Excellence. Now, more than ever, it is vitally important for institutions like ours to continue molding and preparing critical thinkers who challenge, serve, lead and engage our communities. We are grateful for this distinguished acknowledgement by our peers and other members of the higher education community.”

NCCU was a finalist in five other categories: Best Alumni Publication, Best Social Work Program, Best Nursing/Health Program, Male Student of the Year and Female President of the Year.

About the HBCU Awards

Jarrett Carter Sr., founding editor of the online news magazine, said the HBCU Awards are based in part on how well a university’s accomplishments are showcased through positive regional and national publicity.

“This past academic year, NCCU did an extraordinary job of demonstrating excellence – in athletics, student achievement, faculty achievement, research and development, and community outreach,” Carter said.

“Those things are valuable not just because they are important for the university community but also because the university did such a wonderful job of telling the story, making NCCU representative of what is possible for all HBCUs.”

HBCU of the Year Contenders