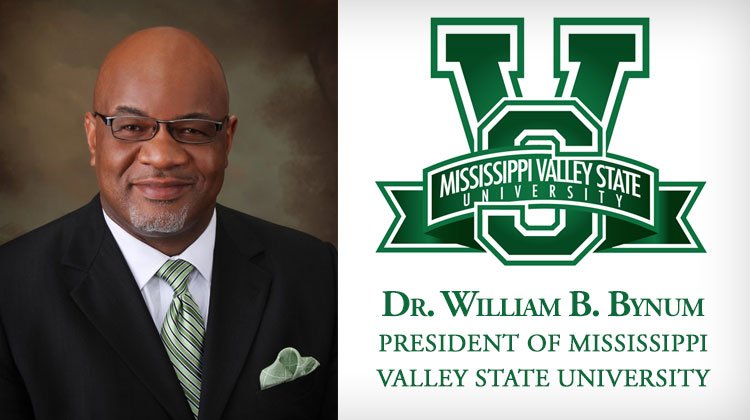 The Board of Trustees of State Institutions of Higher Learning has extended the contract of Dr. William B. Bynum, president of Mississippi Valley State University, until June 30, 2019.

Since becoming president of the rural institution, Bynum has increased enrollment, improved town and gown relations, reinstalled the University College model, began a general studies degree offering, and increased fundraising at the University by 165 percent, among a host of other achievements.

‘It is an honor and privilege to be given the opportunity to continue to serve the students and state of Mississippi,’ said Bynum. ‘We will continue to spearhead growth at the institution with the assistance of our alumni and community partners.’

He has reinvigorated the campus community with his vision ‘One Goal. One Team. One Valley.’

“Dr. Bynum understands that universities cannot exist in a vacuum and he has worked tirelessly to build relationships with the communities surrounding Mississippi Valley State University,” said Dr. Glenn F. Boyce, Commissioner of Higher Education. “He has reached out to civic change agents, business leaders, elected officials, and educators in both community colleges and K-12 schools to strengthen the university and the critical role it plays in the success of the Mississippi Delta.”

Bynum has more than 25 years of higher education experience, with roles spanning from instructor to vice president of student affairs and enrollment management. He has held positions at Morehouse, Lincoln University of Pennsylvania, Clark Atlanta University, and Davidson College.

A native of Rocky Mount, North Carolina, Dr. Bynum earned a Bachelor of Arts degree in sociology while a scholarship student-athlete at Davidson College and a masters and Ph.D. in sociology from Duke University while serving as a Duke Endowment Fellow.