You are here: Home / HBCUs / HBCU vs PWI Debate: The Value and Rigor of a Black College Degree


Over the past month into the next month, many African American students will walk across stages, shake hands, receive degrees and look forward to the future ahead of them as college graduates. This is a great accomplishment for all of these students. They have worked hard. They have achieved their goals. And if they went to an HBCU, there’s a greater chance, they are going to graduate or professional school.


Did that shock you? Well it shouldn’t. HBCUs have been top feeders of African American students into graduate, law, and medical schools for decades. Some institutions have even begun to establish partnerships with HBCUs to bring exposure and create direct pipelines into their institutions. Consider a few of these programs noted below:

Participants in this program earn a master’s degree at Fisk in physics, biology, or chemistry, with full funding support. They participate in valuable research experiences with faculty mentors and receive fast-track admission to one of the participating Vanderbilt PhD programs, with full funding.

Annually the University of Pennsylvania’s Graduate School of Education hosts juniors from HBCUs, giving them an opportunity to learn more about pursuing graduate education. Students experience a graduate class, meet with current students and faculty, and learn about the admissions and financial aid process. The program serves as a pipeline for students to apply to Penn’s programs upon graduation from their HBCU.

It seems many graduate and professional programs realize that if they want to access some of the most talented students from underrepresented groups, African Americans in particular, HBCUs are a plentiful source of students. Yet, it seems some people are still in need of a good old fashion schooling when it comes to the merits of HBCUs. This past week a heated conversation and debate broke out on Twitter after a poster tweeted how she believed that a 4.0 GPA at an HBCU was not equal to a 4.0 GPA at a rigorous PWI. Now we could get into a philosophical debate on the word “rigor” and its elitist (read: racist and classist) derivatives and undertones, we could get into a excavation of the comparison of HBCUs to PWIs reflecting the conscious and subconscious belief that “White is right” or “White is better” – remnants of an America sprinkled with White supremacist foundations, or we could talk about how HBCUs never seem to get the luxury of being looked upon as a diverse group of institutions that their PWI counterparts receive. We could discuss all of those things, but we won’t. 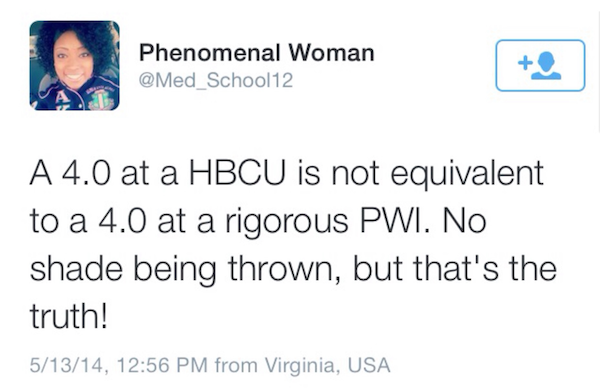 What we will discuss are the facts. And those facts include a few key pieces of data. A report from the National Science Foundation found that HBCUs produce the largest amount of African American students that go on to pursue PhD’s in the STEM areas. In fact, approximately 33% of African American students receiving their PhDs in STEM attained bachelor’s degrees from HBCUs. To put that in perspective, roughly 105 institutions are producing a third of all African Americans obtaining PhDs in STEM fields. HBCUs are clearly producing more than their fair share of competitive students and often with fewer resources than their PWI counterparts. The Association of Public and Land-Grant Universities (APLU) recently reported that HBCU graduates go on to pursue graduate and professional degrees in STEM, law, and medicine at Harvard, Penn, Yale, Berkley, Duke, the University of Georgia, the University of Virginia, Johns Hopkins and other top-ranked universities. In fact African American students that attend an HBCU are more likely to go on to graduate or professional school than African American graduates from other institutional types. HBCU graduates are clearly academically competitive and competitive programs are acknowledging this via admission, even if the general public chooses to remain ignorant of the fact.

Another fact. Though we have this data, we do not have enough. It is imperative that our HBCUs become diligent in the area of data collection. Through efforts to collect and track data of their students, their programming results, and successes, HBCUs can not only control their institutional narrative, but also provide information to the poorly informed people that try to diminish their students and their institutions. Another fact. HBCUs have current alumni who exhibit the strong and competitive education that many HBCUs provide their students. It is important for HBCUs to begin developing relationships with these alumni and encouraging them to be vocal about their experiences. It is important to formally track where alumni are accepted for post-graduate study and occupations. This is not just beneficial for future fundraising, but also to show those who would try to downplay the quality of an HBCU education that making such blanket statements is not just problematic, but also misinformed.

It is disheartening that we are still having the argument that HBCUs are not as “rigorous” as some PWIs. Another fact. There is great diversity across American higher education regardless of the racial history of an institution and rigor and selectivity are part of that diversity. It is even more disheartening when this ill-informed argument is used within the African American community. For those of us who understand the historical and contemporary value of HBCU education and the competitiveness of their students, the best arsenal is our information. It has been said that the proof is in the pudding. In this case I would say the proof is in the product and to see the quality, academically competitive, civically minded, scholars and professionals at HBCUs we have to look no further than number of men and women who crossed HBCU commencement stages this spring, 4.0s or otherwise.

Felecia Commodore is a third year PhD student in Higher Education at the University of Pennsylvania’s Graduate School of Education. She has a background working as an admissions counselor and academic advisor at Trinity University, Washington, D.C. and University of Maryland, College Park respectively. Felecia obtained an M.A. in Higher Education Administration from the University of Maryland, College Park, MD and a B.S. in Marketing with a minor in Sociology from Drexel University in Philadelphia, PA. Felecia was recently a 2013 intern for the Southern Education Foundation. Felecia’s research focus area is HBCU leadership, governance, and administrative practices.

Marybeth Gasman is a professor of higher education in the Graduate School of Education at the University of Pennsylvania. She also serves as the Director of the Penn Center for Minority Serving Institutions. Marybeth is an expert on Historically Black Colleges and Universities, Black leadership, fundraising and philanthropy in communities of color and Minority Serving Institutions. She is the author of 18 books in these subject areas and many articles.