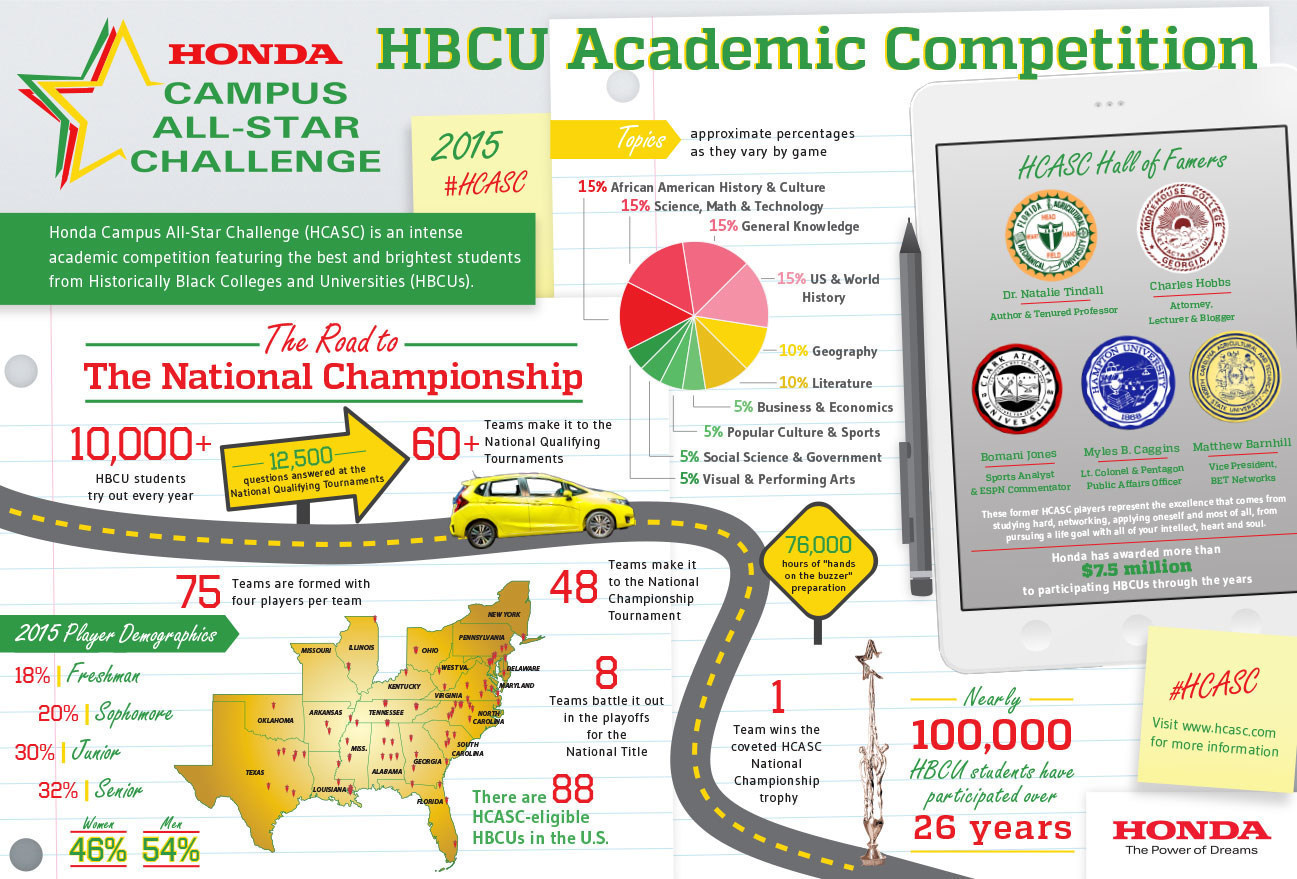 Brainpower from America’s Historically Black Colleges and Universities (HBCUs) will be on full display beginning this weekend at the 26th annual Honda Campus All-Star Challenge (HCASC) National Championship Tournament.  Students representing the very best and brightest have spent the school year diligently preparing and qualifying to compete in the national championship of this unique academic tournament, to be held March 21-25, 2015 on the campus of American Honda in Torrance, California.

This year’s road to the championship began in the fall, with 76 HBCUs vying for the final 48 slots. Through countless hours of study, drills and practice, elite teams emerged, knowledgeable and ready to take on the competition. See the full list of participating HBCUs.

“Each student that qualifies for the ‘Great 48’ is a champion in his or her own right,” said Steve Morikawa, Assistant Vice President of Corporate Community Relations at American Honda.  “Honda is proud to welcome this year’s class into an exceptional community of HCASC alumni that comes together each year to celebrate academic excellence.”

The 2015 finals will be live-streamed on Monday, March 23rd starting at 12:00pm Eastern on HCASC.com.  Connect with HCASC via social media for updates on Facebook (www.facebook.com/HCASC) and Twitter (www.twitter.com/HCASC), using #HCASC.

About Honda Campus All-Star Challenge:
Celebrating HBCU excellence, Honda Campus All-Star Challenge is one of Honda’s largest and longest running philanthropic initiatives in the United States.  Since 1989, the program has awarded more than $7.5 million in grants to participating HBCUs, impacting the lives of over 100,000 students across 22 states.  Through programs like HCASC, Honda is not only helping students academically, but building them up for the future, helping position them for career success.  HCASC’s impressive roster of past participants includes engineers, lawyers, doctors and professors.  A number of high profile former HCASC participants have been inducted into the HCASC Hall of Fame, including Clark Atlanta University alumnus and ESPN anchor, Bomani Jones, who participated in two HCASC competitions between 1999 and 2001, serving as team captain in 2001.

About Honda
Honda seeks to be a company that society wants to exist, creating products and technologies that improve the lives of people while minimizing the environmental impacts of its products and business operations to ensure a sustainable future for society.  Honda is also committed to making positive contributions to the communities where we do business, to socially responsible business practices and to the promotion of diversity in our workforce.  From our involvement in STEM education and Historically Black Colleges and Universities (HBCUs) to our support of pediatric brain tumor research, and support of volunteer efforts by Honda associates, including environmental clean-up activities, Honda believes in giving back to the communities where we live and work.  Honda’s long-standing commitment to the support and success of the nation’s HBCUs began more than 25 years ago with the establishment of the Honda Campus All-Star Challenge, a program designed to showcase the academic gifts and prowess of HBCU students.  American Honda began its support of Honda Battle of the Bands more than 12 years ago as an effort to support HBCU music programs.  Find out more at csr.honda.com.