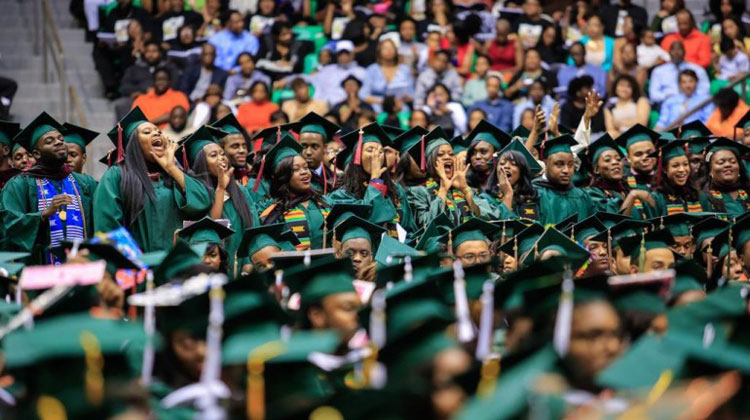 The State University System (SUS) Board of Governors announced on March 17th the results of its 2014-2015 performance funding model score sheet. The results reveal that Florida Agricultural and Mechanical University (FAMU) made big gains in several key metrics, including an 8 percent gain in the median average wages of undergraduate students employed in Florida one year after graduation; and an 8 percent increase in the number of graduate degrees awarded in areas of strategic emphasis, including STEM. The University also saw a 5 percent gain in second-year retention rates.

“The improvements shown in our 2014-2015 performance metrics are a reflection of the FAMU community unifying to ensure progression in our student success efforts. All hands were truly on deck, including our students, faculty, staff, alumni, trustees, and supporters,” said President Elmira Mangum, Ph.D. “Through the implementation of new technologies and initiatives to promote student success, we were able to exceed last year’s results by 13 points, and we look forward to even greater gains next year.”

The University received marks of excellence in the following performance funding categories:

“Through the hard work and dedication of our faculty, staff and students, and through the continuation of existing initiatives and new ideas, we are gratified to see significant improvement in several of our metrics, most notably our academic progress rate,” said Provost Marcella David. “We are continuing to deploy new strategies and energies to enable us to meet and exceed the goals identified in our Work Plan. I thank everyone who has brought their ideas and energy to bear on improving our metrics.”

According to the Board of Governors, this year’s improvements will yield additional funding opportunities for the University, which is now ranked among the top 8 SUS schools. The legislature has proposed a $500 million investment in performance funding for the 2016-2017 year, with state universities contributing $275 million to match a $225 million investment from the state.

“Universities are designed to be hubs of creativity, so it’s no surprise that they’ve risen to the challenge by the Governor, Legislature, and our Board by putting some unique new ideas into action,” said Ned Lautenbach, vice chair of the Board of Governors. “The result is a better education for students and a more prepared workforce for our state.”

“The performance funding results announced yesterday by the Board of Governors is truly reflective of the dedication that FAMU, and its sister institutions in the State University System, has given to preparing students for careers and productive citizenship,” Warren said. “The Board, administration, faculty, and staff at FAMU are all committed to the obligation we share to bolster student persistence, intellectual development, graduation rates, and employment. I applaud the FAMU administrative team, its faculty, staff, and students for their dedication to this work.”

Warren added, “FAMU continues to make great advances in the area of student success; and with the new programs and processes that have been put in place, I have great confidence that next year’s result will be even better.”