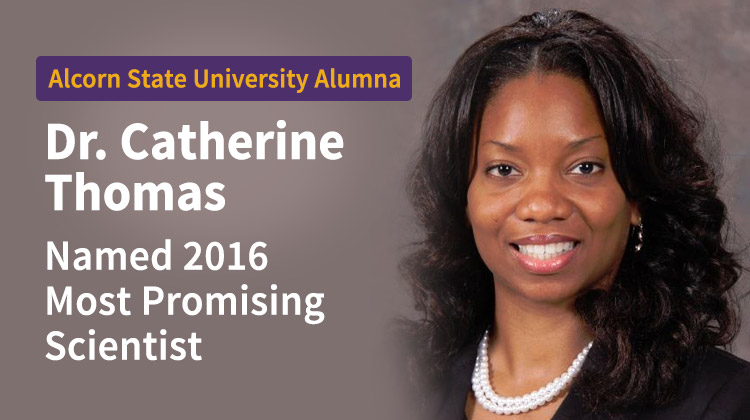 Alcorn State University alumna Catherine Thomas developed a real passion for science back when she was in junior high school in Port Gibson, Mississippi. With her interest in the subject and support from her family, Thomas grew up to become the successful scientist that she is today.

“My interest in science started when I was in middle school taking physical science classes,” said Thomas. “From that point on, I knew that I had a strong curiosity in the physical and chemical processes of how things worked. This curiosity, cultivated by my family, led me to pursue science in college.”

Thomas, who earned a master’s degree in biology in 2006 from Alcorn, earned the 2016 Minority in Research Science Emerald Honoree Most Promising Scientist Award at the 30th Annual Black Engineer of the Year Awards in Philadelphia, Pennsylvania. She is a research biologist at the U.S. Army Corps of Engineers’ Engineer Research and Development Center (ERDC) in Vicksburg, Mississippi. Her duties at ERDC include conducting laboratory tests, writing research proposals and manuscripts, interpreting data and running analytical instruments.

Winning the award is a stand out accomplishment for Thomas, but what made it even better was a recommendation from a high ranking figure within the U.S. Army Corps of Engineers.

According to a report on www.usnews.com, minorities and women are underrepresented in the science, technology, engineering and mathematics (STEM) fields. Thomas’ success as a female, African-American scientist is eye opening. She suggests that teachers peak their students’ interests in STEM careers by introducing them to what the field has to offer. With her success, she hopes to inspire young women and minorities to pursue STEM careers.

“My strategy would be to spark their interest in STEM with enjoyable, critical thinking activities and let them decide. Lecturing students alone on how successful they could be in a STEM field is not enough. Another important aspect of encouraging students toward STEM is to inform them of the many interesting careers available that they are not aware of. A student will never know what he/she can do if they don’t know it exists.”

“Having a STEM career is very fulfilling as the challenges are continuous. It is a rewarding feeling to see how my research ideas can be transferred into real life field applications. As a black woman in a STEM field, my hope is to be an example for young black women and to encourage them to pursue STEM careers.”

Thomas credits some of her former professors from Alcorn for playing a significant role in her scientific success.

“During my time at Alcorn, I was able to meet some great people. Dr. Troy Stewart assisted me in obtaining my student contractor position at ERDC through the University. This was the preliminary phase of my career. While a student contractor at ERDC, Drs. Bettayia Rajanna and Malvin Williams were great mentors to me. Dr. Rajanna was also my advisor for the research I was conducting at ERDC for my master’s thesis.”