A 37-year career in law enforcement has come full circle for Edward Waters College (EWC) President and alumnus Nathaniel Glover. The 29th President of the institution in Jacksonville, FL fused his passion for public safety and devotion to providing a quality education for the College’s students with the opening of the EWC Center for Criminal Justice and Forensic Science and Jacksonville Sheriff ’s Office Zone 5 Substation.


“Our students have access to a working constituency of law enforcement. They share the halls with an actual functioning police substation,” said President Nathaniel Glover.

The two-story, 10,500-square-foot building houses Jacksonville Sheriff ’s Office officers, two classrooms and a forensic lab for EWC students. Beyond the additional classroom space and increased police presence in the Zone 5 community, the facility also provides a unique opportunity for criminal justice students to routinely interact and network with law enforcement professionals without ever having to leave the heart of campus. President Glover, a former two-term Sheriff of the City of Jacksonville/Duval County, also serves as a guest lecturer in the facility to supplement the uniqueness of the college’s criminal justice program.

“I compare this opportunity to that of medical students in hospitals,” said President Glover. “This facility similarly bridges the gap between the real world and the classroom.”

President Nathaniel Glover made history when he became the first African-American elected sheriff in the State of Florida in more than 100 years, since Reconstruction. “We want this to be the premier criminal justice program in the country. With my previous professional life as a historically elected sheriff, it would have been criminal, no pun intended, if I didn’t make certain that this
happened. It has so much benefit to the community. It is the only substation in Jacksonville located in the middle of a neighborhood. And it provides a practical learning environment for our criminal justice students,” said Glover.

“In order for every great community to strive, they must pull together their resources for the common good,” said Wayne Weaver.

Funds for the facility were raised through a collaborative public/private partnership that included EWC, the community and the Jacksonville Sheriff ’s Office which provided $900,000 in drug forfeiture funds for the project. Private donors raised $985,000, and the other $750,000 came from the U.S. Department of Education’s Student Aid and Fiscal Responsibility Act.

“When Edward Waters College succeeds, the City of Jacksonville succeeds,” said Jacksonville Mayor Alvin Brown at the grand opening. The students taking classes there join 240 officers who report to the substation once a week.

“The forensics lab really gives us an opportunity to get the hands-on experience that goes beyond the textbook,” said EWC Senior, Yvette Perry.

This facility is the largest building expansion on the campus since 2005. “I am so proud to be able to expand the legacy of an institution that has helped me open so many doors,” said President Glover. Edward Waters College is the oldest historically black college and private institution of higher learning in Florida. The College was established in 1866 by the African Methodist Episcopal Church. 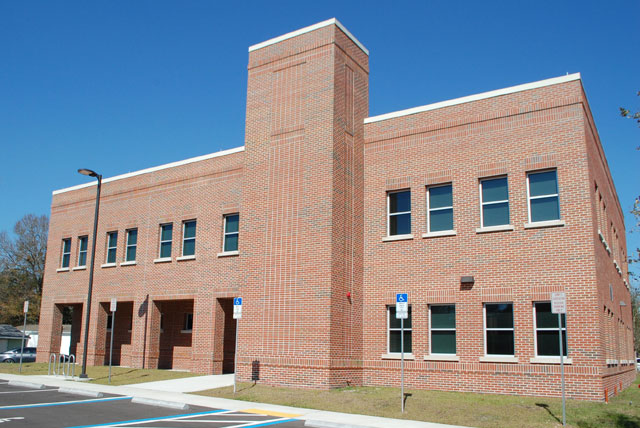