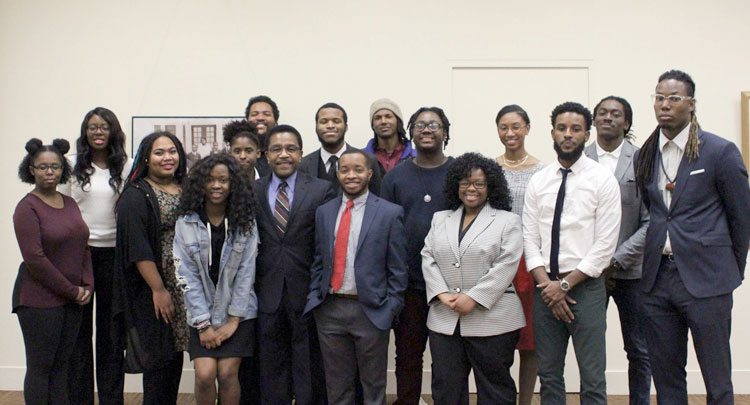 Bowie State has already sent 28 students to China for semester-long study abroad trips, with scholarships provided by the Chinese government. That’s more than any other historically black college or university in the China-HBCU Network, made up of 43 HBCUs. Bowie State is one of eight of the network’s founding members.

The spring 2017 China Scholars, who range from freshmen to seniors, will study courses related to their major programs, along with a language class in Mandarin Chinese. This semester, two students from Coppin State University and Morgan State University will join the Bowie State group.

Two Bowie State students – Angel Tillery and Lamar Baker – are returning to China for another semester with the program. For Tillery, it will be her third study abroad semester in China.

“I just loved it so much,” she said. “And I talked about it a lot after I got back,” as she remarked about the high participation from students in her major of visual communications and digital media arts.

Traveling Outside the U.S.

For some of the students, it will be their first time traveling outside of the country. Margo Desil wanted to do something different and have a unique experience while she is pursuing a degree in psychology.

“I felt like this would be a change – it’s school and a fun experience,” she said. “It’s an amazing thing to do.” She wants to become a clinical psychologist and plans to attend graduate school when she returns from China. She knows that a study abroad experience would help her to become a more culturally competent psychologist.

“It’s going to give me a bigger view of the world, interacting with different people,” she said. “I’ll be able to understand more about where they are coming from and their culture.”

Freshman Christopher Chaplin had made a plan to study abroad in at least two or three countries while attending Bowie State. The business administration major is already starting to check off his list of personal goals.

“I decided at a young age that I did not want to spend my life knowing just one place, Maryland,” he said. “I just decided that I not only wanted to push myself in terms of studying outside the country, but in anything in life.”

Here is the list of all of the spring 2017 China Scholars: