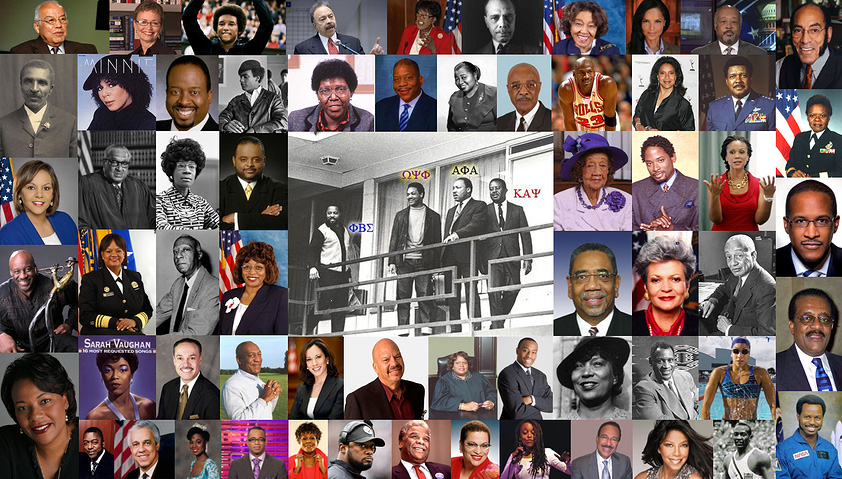 During Black History Month, we celebrate the achievements, culture, and heritage of people of African descent. Most notably, we recognize those on whose shoulders we stand. Let’s take a look at how Black Greeks have influenced, and continue to influence, black history and leadership diversity in America.

We know that Black History Month started as “Negro History Week” and we know that Carter G. Woodson is the reason we celebrate the achievements of people of African descent. Did you know that Woodson was a man of Omega Psi Phi?

So, you and I know we need to do better when it comes to singing “Lift Ev’ry Voice and Sing”. You know that, right? Let’s give James Weldon Johnson—a Phi Beta Sigma man—the credit he deserves.

3. The Lighting of a Fire

In researching the professional patterns of Black Greeks, I have found that we have dedicated ourselves to education from the beginning, literally. Of all of the Divine Nine founders, at least 50 per cent were educators. Harriet Josephine Terry, an Alpha Kappa Alpha founder, has a building in her name at Alabama A&M; and Leonard Morse, a Sigma founder, served as president of Edward Waters College. Sigma Gamma Rho, however, bears the distinction of being the only BGLO whose founders were all educators.

Speaking of founders, while so many of us in the Divine Nine speculate on what our founders’ would want for our organizations, the men of Iota Phi Theta have the privilege of connecting with six of their 12 founders today. Charles Brown, Frank Coakley, Louis Hudnell, John Slade, Lonnie Spruill, Jr. and Michael Williams are still with us. You can even like Iota founder John D. Slade on Facebook! That’s hot.

5. We Are Now Making Our Approach

Many African-American women excel in law. Violette Anderson could well be considered the mother of this trend after she became the first African-American woman admitted to practice before the U.S. Supreme Court in 1926. She also served as vice president of the Cook County Bar Association as well as the eighth grand basileus of Zeta Phi Beta.

There is no doubt that Shirley Chisholm showed the world how strong and resilient a black woman can be. A woman of Delta Sigma Theta, she was the first African-American woman to serve in the U.S. congress and as a major-party U.S. presidential candidate. She also survived three assassination attempts.

Many Black Greeks serve America with honor through military service. A major precedent for African-American leadership in the military was set when Daniel “Chappie” James, Jr., a Tuskegee Airman, a member of the United States Air Force, and a Kappa Alpha Psi man, was named the military’s first African-American four-star general in 1975.

10. Are You Ready for Some Football?

Many people don’t realize that Alpha Phi Alpha has been for quite some time. One member, Frederick Douglass “Fritz” Pollard, was the first African-American coach in the original NFL when he founded the Chicago Black Hawks in 1928. Another member, Art Shell, became the first African-American coach in the modern NFL (after the NFL/AFL merger) when he took over the Oakland Raiders in 1989.

Over the years, many African-American singers have filled the White House with beautiful music, but the first African-American to sing at 1600 Pennsylvania Avenue was Etta Moten Barnett, an Alpha Kappa Alpha woman.

If you enjoy “The Great Debaters”, you enjoy the story of a team that was led by Omega man, Melvin B. Tolson.

Bishop Vashti Murphy McKenzie is blessed with history. Not only is the Delta woman the first woman to serve as the titular head of the African Methodist Episcopal Church but she is also the granddaughter of Delta founder, Vashti Turley Murphy.

There is no doubt that the college football landscape is peppered with the accomplishments of Black Greeks but Tommie Frazier holds a special place, especially in the state of Nebraska. Frazier, an Iota man, is one of the few quarterbacks in college football history to win back-to-back national championships – in 1994 and 1995. He was also the first Cornhusker to win the Johnny Unitas Golden Arm Award and was named one of the 10 greatest college football players of the 20th Century by Sport magazine.

It can be hard to keep a job as a higher education president but Dr. Norman Francis seems to have it figured out. As of today, he is the longest sitting college or university president in America at more than 45 years. The Alpha man is the president of Xavier University of Louisiana, the only Catholic HBCU in the Western Hemisphere.

During my radio days I had the honor of interviewing two U.S. education secretaries–Arne Duncan and Dr. Rod Paige. Dr. Rod Paige is not only the first African-American U.S. secretary of education but he is also a Sigma.

Sigma Gamma Rho woman Maritza Correia McClendon missed the memo. Not only is she the first Puerto Rican of African descent to earn a place on the U.S. Olympic swim team but she became the first black female swimmer to break an American record at the NCAA Championships in 2002.

It is rare that one gets to shake hands with a history maker. I am fortunate to have had that opportunity when I met Judge Bernette Johnson in my home state, Louisiana. She is a Zeta woman and the first African-American woman to serve on the state’s Supreme Court.

Kamala Harris is a rising star in American politics. She serves as California’s attorney general and the AKA is the first female African-American and Asian-American to hold the post.