You are here: Home / Alumni / 7 Steps HBCU Alumni Must Take in 2017 to Stop the Bleeding 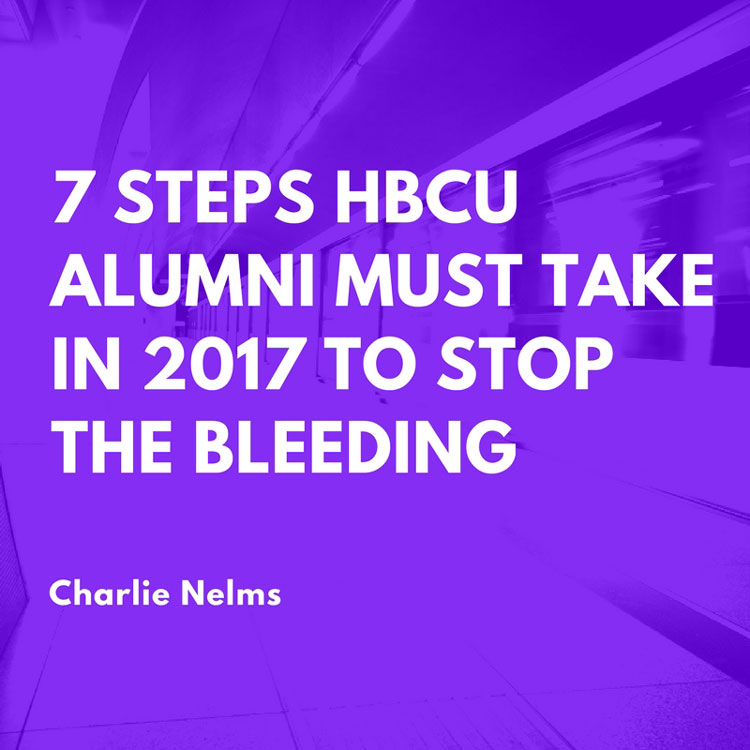 While I’m tempted to wish you a Happy New Year, I must admit that the uncertainty of the policy positions proffered by the 45th President of the United States, Donald J. Trump, and the potential Congressional response, weigh heavily on me the closer we get to Inauguration Day, January 20, 2017. I hope they concern you and other American’s of goodwill too. But I have lived long enough to know that concern alone is inadequate. By becoming more strategically engaged in the political process, we have the opportunity to limit the impact of the actions of President-elect Trump and those of the House and the Senate. Don’t forget, that all 435 members of the U. S. House of Representatives are up for re-election in 2018, and fully two-thirds of all Senators. We aren’t nearly as helpless as some political pundits would have you believe if we fully embrace our role as citizens, and hold those we elect accountable for their actions. “We the people” are the electorate and it’s time for us to claim our rightful place in the political process. We mustn’t stand idly by and allow Congress to enact policies under the guise of what the American people want—policies that are detrimental to our communities, institutions, and citizens.

Let me return to the topic that occupied my attention, heart and soul as I set out to write this letter to you. Like you, in 2016, I was aghast as contentious public battles played out between some university boards of trustees and the presidents they had hired to lead our institutions, while those responsible for appointing board members took a hands-off approach. As a Higher Education Consultant and HBCU advocate, I know for certain that there were just as many battles occurring behind closed doors as board members debated whether to censure the president, significantly limit his/her authority or to terminate the president altogether. Every time these high profile public actions occur the real losers are students and alumni, especially. Students lose because the future stability of the institution is compromised, and alumni lose because the institution’s brand is compromised thereby causing employers, prospective students and parents and donors to question the value of education provided by the institution. There are no winners!

The challenges faced by our alma maters are inextricably linked. Anyone who thinks, for example, that budgets, enrollment, accreditation, governance and student success are independent issues are naïve at best and uninformed at worst. While some HBCU proponents may view me as the bearer of bad news, I view myself as an honest broker of a message that we HBCU alums need to hear and heed. If we love the institutions that gave rise to our personal and professional success as much as we say we do, we must do the following seven things immediately. Otherwise, HBCUs will become relics of the past. Evidence to support my views can be readily found in turnover in presidential leadership, governance dysfunctionality, and institutions facing probation or sanctions by accreditation agencies, enrollment, and fiscal instability. Alums, these are serious issues that require acknowledgment and action by those of us who must be stewards and guardians of those institutions that served as the bridge that brought us over. Let’s turn our love words into action by doing the following:

1. Cease publicly airing the discord and dirty laundry besetting your alma mater. Such behavior creates more problems than it solves;

2. Actively recruit prospective students for the institution. Your personal and authentic testimony about how your life was transformed by the institution is more valuable than hundreds of thousands of dollars expended on radio and television commercials, billboards, newspaper ads and inserts, or robot marketing calls, among other promotional activities;

3. Actively advocate for students from your institution participate in company internships, co-op experiences or externship programs. Don’t just be an advocate, be a mentor for students. If no program exists, create one;

4. If your company or institution doesn’t have a formal academic relationship with your alma mater, propose one and take a leadership role in nurturing and sustaining one;

5. Include your alma mater in your annual or monthly budget. Our publicly professed love is a lie unless we’re willing to back it up with continuous financial investments in support of students;

6. Hold trustees accountable for institutional governance rather than remaining silent when they venture into the institution’s leadership lane.

7. Insist that the institution’s leadership and faculty undertake a comprehensive and timely review of all academic degree programs and discontinue those that no longer yield dividends in proportion to the investments made by the institution.

I wish you and all members of your alumni base the best in the years ahead. Meanwhile, I hope you’ll enjoy the best of everything that 2017 has to offer.