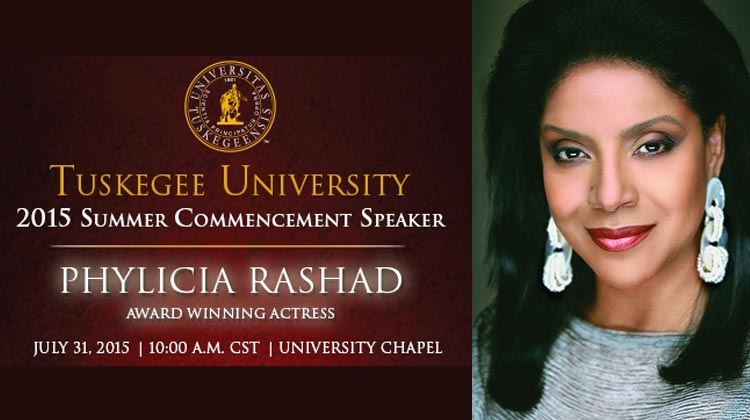 Phylicia Rashad, an award-winning actress will address the Class of 2015 during this year’s summer commencement, Friday, July 31. The ceremony will be held at 10 a.m. CST in the University Chapel.

Rashad portrayed Claire Huxtable, a popular TV character whose appeal has earned her numerous honors and awards for more than two decades. While television was a catalyst in the rise of Rashad’s career, she has also been a force on the stage, appearing both on and off-Broadway, often in projects that showcase her musical talent such as “Jelly’s Last Jam, “Into The Woods,” “Dreamgirls,” and “The Wiz”. She also has earned several accolades as a dramatic actress and director. She performed Violet Weston in “August Osage County”, Big Mama in Tennessee Williams’ “Cat on a Hot Tin Roof, Aunt Ester in August Wilson’s “Gem Of The Ocean,”(Tony Award nomination) and Queen Britannia in Shakespeare’s “Cymbeline” at Lincoln Center.

Rashad received both the Drama Desk and the Tony Award for Best Actress in a Play for her riveting performance as Lena Younger in the Broadway revival of Lorraine Hansberry’s “A Raisin In The Sun.” She appeared in Tyler Perry’s “Good Deeds”, and starred in Perry’s highly acclaimed film version of Ntozake Shange’s “For Colored Girls Who Have Considered Suicide When The Rainbow Is Enuf.”

She made her directorial debut at the Seattle Repertory Theater with August Wilson’s “Gem of the Ocean.” She directed Ebony Repertory Theatre’s production of “A Raisin in the Sun in the spring of 2011.” She has also directed Wilson’s “Joe Turner’s Come and Gone” at the Mark Taper Forum in Los Angeles (2014 NAACP Theatre Award for Best Director) and “Fences at the Longwharf Theatre” at the McCarter Theatre. She will return to the Mark Taper Forum this season to direct Paul Oakley Stovall’s “Immediate Family.”

Respected in academia, Rashad is the first recipient of the Denzel Washington Chair in Theatre at Fordham University. She also teaches master classes at renowned learning institutions that include Howard University, Julliard, and Carnegie Mellon.