You are here: Home / List of HBCUs by State / Morehouse College: An HBCU Lifestyle Guide

Morehouse College was established in 1867, under the leadership of the Reverends William Jefferson White, Richard C. Coulter, and Edmund Turney. They came from different cities, careers, and historical backgrounds, but they were committed to building an institution that would provide a comprehensive education for African-American men.

Today, Morehouse is widely regarded as the college of choice for black men in the United States. As an all-male HBCU, Morehouse alumni have played an important role in business, athletics, politics, religion, and the arts for more than one hundred and fifty years. And yet, its mission remains the same: to develop men with disciplined minds who will lead lives of leadership and service, who will pursue truth, morality, and justice with the same passion and conviction as the students who came before. 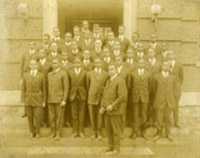 On February 14, 1867, the Augusta Institute was established in the basement of Springfield Baptist Church. The Rev. William Jefferson White, an Atlanta Baptist minister and cabinetmaker, founded the institution with the support of the Rev. Richard C. Coulter, a former slave from Atlanta, Georgia, and the Rev. Edmund Turney, organizer of the National Theological Institute for educating freedmen in Washington, D.C.

Under the direction of its first president, Dr. Joseph T. Robert, the Augusta Institute began to train African-American men for careers in ministry and teaching. In 1879, the institution moved from its home in Augusta to Atlanta’s Friendship Baptists Church, where its name was changed to Atlanta Baptist Seminary. Ten years later, Morehouse men and Spelman women would study together in the basement of the FBC, foreshadowing their future relationship as members of the Atlanta University Center.

In 1913, the school was renamed as Morehouse College, an undergraduate institution that would gain an international reputation for scholarship, leadership, and service. The Morehouse School of Medicine was founded in 1975, and today, the college and the medical school are recognized as the leading institutions of higher education for African-American men in the United States

The average Morehouse College student has a 3.6 GPA, a 1170 combined SAT score, and has completed 4 AP/IB courses before their freshman year. With such high standards, its no wonder that the school ranks among America’s Most Grueling Colleges (according to the Huffington Post). The Morehouse College admissions process is competitive, and for good reason: this all-male HBCU is known for producing African-American titans.

Morehouse College is one of the two HBCUs in the United States that have produced Rhodes Scholars, and to this day, Morehouse is the number one feeder school for black males who are entering Ivy League graduate programs. In pursuit of excellence, students have the option to choose one of 26 academic majors and participate in a wide range of extracurricular activities to set themselves up for success after graduation.

As a member of the Southern Intercollegiate Athletic Conference, Morehouse College has seven varsity sports that students can participate in: baseball, basketball, cross country, football, golf, tennis, and track & field. Many of the alumni who have participated in MC’s athletics have built successful careers in professional sports, including Ramon Harewood, Harold Ellis, Isaac Keys, Edwin C. Moses, and Darrius Williams.

Related Post – Top Research Universities that are HBCU’s and Ranked Highest in the Nation;