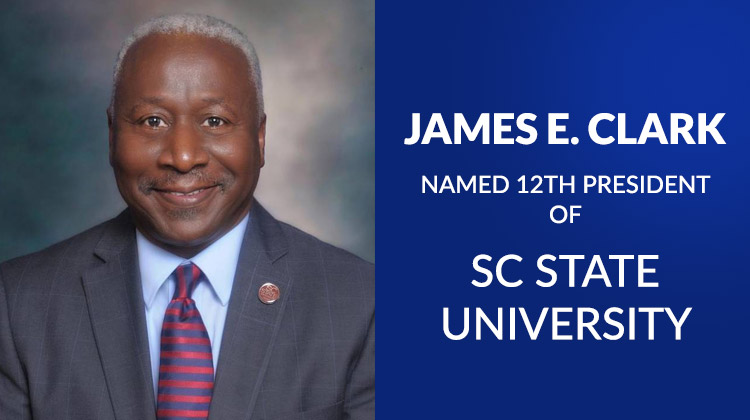 James Clark has been named the 12th president of SC State University. Following a meeting of the SC State Board of Trustees in late June, the announcement was made by Board Chair Charles S. Way Jr. Clark will serve a four-year term. His appointment began July 1, 2016.

Way is chair of the entirely new SC State board that was appointed one year ago by Governor Nikki Haley and the State Legislature as a result of numerous challenges SC State faced, including the potential loss of its accreditation.

“To fulfill the commitments we made in securing accreditation and strengthening further SC State’s financial condition, we need a leader with proven success in meeting these kinds of challenges,” Way noted. “James Clark knows how to build and lead teams to success. He has had an outstanding career in business, a long-time involvement with higher education in South Carolina and a close association with SC State.”

A resident of Columbia, James Clark’s business career includes being vice president of a $1- billion division of AT&T which he converted from a money-losing division into the most profitable division in AT&T’s computer business. A graduate of M.I.T. and the M.I.T. Sloan School of Management, Clark also worked with General Electric, Gillette and Exxon International.

Clark served on the Benedict College Board of Trustees for 18 years, and he has been chair of the University of South Carolina Research Foundation for three terms. He has also been an SC State Board member during the past year.

“James Clark did not seek the job of president,” Way said. “But it became increasingly clear to our board that we had in our midst the ideal individual to lead SC State at this critical time. This was a decision made unanimously and with great enthusiasm.”

In addition to securing its accreditation, SC State has made several other accomplishments during the past year, as noted by Way. “We have balanced the budget, exceeded enrollment goals and increased alumni giving and faculty grants,” he said. “This has been a collaborative effort. Interim President Dr. W. Franklin Evans and the entire SC State family contributed significantly to the university’s success.”

Having put his future on hold for a year, as he addressed the needs of SC State, Dr. Evans has resigned as interim president to have the time to pursue his personal and professional goals. Way praised Evans’ work and wished him every future success.

James Clark, who begins working immediately, said, “I am honored to have this opportunity.” “Having been closely involved with the accreditation process, I am acutely aware of the accreditation board’s concerns about our financial condition and the commitments we needed to make to retain our accreditation. I am also fully committed to strengthening the learning opportunities of every SC State student, whether it’s in the classroom or through practical real-world experiences. I look forward to working collaboratively with SC State’s outstanding faculty, staff and alumni to enhance every aspect of this important university.”