You are here: Home / Howard University Notable Alumni Past and Present 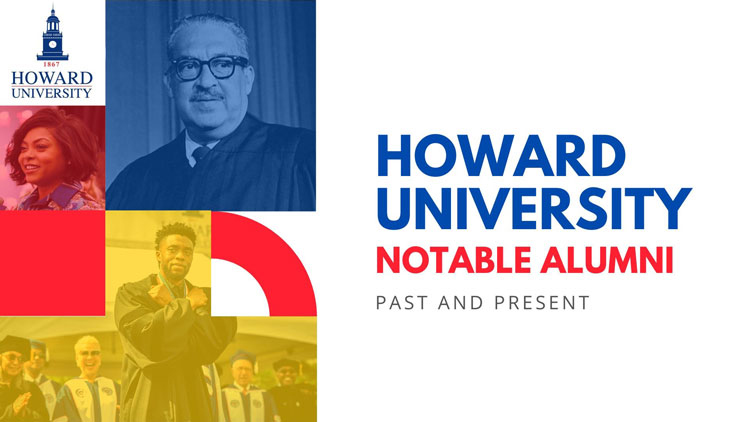 Howard University alumni are know for their success in areas of law, politics, business, sports, entertainment and the medical to name a few. Howard also know as the Mecca is a private Historically Black university located in Washington, D.C. and was established in 1867. There are so many Howard University notable alumni to name, but we made a short list of graduates who went on to make a name for themselves and inspired others.

Here is our short list of Howard University Notable Alumni

Thurgood Marshall graduated from Howard’s School of Law in 1933. He went on to serve the NAACP Legal Defense and Education Fund winning several high-profile cases. he was then appointed by President Kennedy to the United States Court of Appeals Second Circuit. He then served under President Johnson as the United States Solicitor General. He was the first African American to serve as an Associate Justice of the Supreme Court from 1967 to 1991.

Andrew Young is a politician, diplomat, and an activist. He was a leader during the civil rights movement. He went on to serve as a Congressman from the state of Georgia. He went on to become the United States Ambassador to the United Nations during the Carter Administration. He was also elected to become the Mayor of Atlanta. Young was the first African American to serve in the ambassador position and stood up for the rights of citizens even if it was not the most popular choice.

Elijah Cummings was a civil rights advocate. He served in the United States House of Representatives from the state of Maryland from 1996 until he passed away in October 2019. His district included the city of Baltimore where there is a large majority population. He also served in the Maryland House of Delegates. He held student government political offices at Howard where he earned a degree in political science.

Related Post – The Civil Rights Movement, HBCUs, and You

Taraji P. Henson is a graduate of Howard University. She is also an actress and author. She studied acting in school and has gotten several awards including an award from the Screen Actors Guild for outstanding performance. She received an Academy Award Nomination for her role in The Case of Benjamin Button where she stared as a single mother taking care of a child with disabilities. She won an NAACP award for her acting and in 2016 was named one of the most 100 influential people in the world. She wrote Around the Way Girl which was a best seller on the New York Times list. That book was an autobiography where she was praised for her determination.

Basemen is an actor and he graduated from Howard University. He is known for his portrayal of historical figures. He played Jackie Robinson in the film 42 and he also played James Brown in the movie Get On Up. He played fellow Howard alum Thurgood Marshall in the film Marshall. He went on to star as in Marvel’s Avengers movie series as well playing the lead role in film Black Panther. His degree from Howard is in Fine Arts focusing on directing. He began his career behind the scenes and then pursued an acting career.

Howard has produced many successful graduates. The Howard University notable alumni mentioned have had a positive impact on the world and demonstrate my Historically Black Colleges are still relevant.