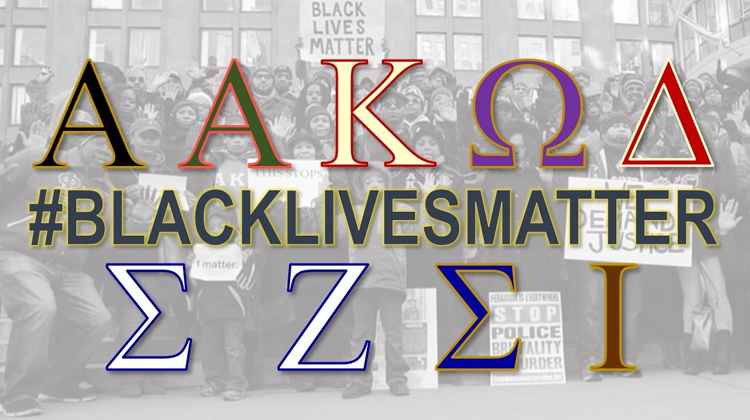 I am proud of Black Greek-Letter Organization college members across America. Many have responded very well to the #BlackLivesMatter movement through their involvement. BGLO chapters and members have also been leaders. For example, the Truman State University Phi Beta Sigma chapter began a #ChalkedUnarmed social media movement. Later, Brown University’s Alpha Phi Alpha chapter’s held a teach-in regarding the Michael Brown grand jury decision. At Southeast Missouri State University, the president of the Sigma Gamma Rho chapter led a peaceful protest in response to the Michael Brown decision; and other BGLO collegians have stayed involved in this critical social justice movement. And trust me, BGLOs are well-aware that there is much work that needs to be done.

During my December Black Greek Success Chat (#BGSChat), I warned that there is no one-size-fits-all approach to changing policy through the #BlackLivesMatter movement. Police brutality against African Americans and other people of color is systemic, therefore, our approach has to be organized and strategic. BGLOs have an opportunity to play an even bigger role in the #BlackLivesMatter movement but we need to understand that everyone has a role to play.

Those who have protested in their letters have shown a keen awareness that they stand on the shoulders of giants. To have college-educated African Americans who represent organizations that collectively stand for scholarship, servant leadership, and fellowship has communicated to the majority community that educated black folks don’t live in ivory towers. BGLO members’ involvement leverages social capital outside of the black community to gain much-needed and well-deserved support.

Chapters, be visible in your communities.

The Grand Rapids, Mich. Kappa Alpha Psi alumni chapter has the right idea. On Dec. 11 the chapter got involved in a community meeting to discuss how to create a more robust relationship among law enforcement and citizens, namely young people of color. This kind of chapter-level involvement on campuses and in communities helps the everyday people understand the moving parts of systemic issues, and it also helps them understand how they can get involved in the process of affecting policy.

Continue to use mass media.

Contrary to popular perception, the energy that we put into battling “Sorority Sisters” is not a one-time deal for BGLO members. Let’s not forget that college chapters, especially those at HBCUs, started the “hands-up” movement only days after the news broke about Michael Brown’s death. Let us not take for granted that using BGLO chapter accounts has been an important part of the #BlackLivesMatter movement. I also encourage college BGLO chapters to use campus newspapers to push this very important social justice agenda.

This is, by far, the trickiest part of the #BlackLivesMatter movement. Idealists be warned that influencing policy is about dealing with policy makers and that means getting involved in the dirty back-room-deal world of politics. I saw this up close when I was the public relations director for Southern University at New Orleans in 2011 when Gov. Bobby Jindal proposed a merger with the University of New Orleans. The reality is most policy makers are not idealists; almost everything they do is based on quid pro quo.

The good news is there are already many BGLO members in key positions sitting at the policy table. Policy is not influenced by emotionally charged platitudes but rather strategic thinkers who are willing to make sacrifices for the good of the many. I am not suggesting that it is necessary or required to sell one’s soul. Black Greeks sitting at the table can serve as highly effective navigators to help citizens understand who the main players are, who the best #BlackLivesMatter spokespeople can be, and the next steps to get the results we want.