You are here: Home / List of HBCUs by State / University of Arkansas at Pine Bluff 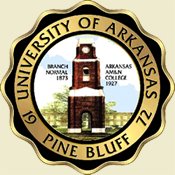 The University of Arkansas at Pine Bluff (UAPB) is a historically black university located in Pine Bluff, Arkansas, United States. Founded in 1873, it is the oldest HBCU and the second oldest public institution in the state of Arkansas (after the University of Arkansas). UAPB is a member school of the Thurgood Marshall Scholarship Fund. It is known popularly by its moniker the “Flagship of the Delta. It’s nickname is Golden Lions and the University is member of the Southwestern Athletic Conference (SWAC). Their colors are Black and Gold and their motto is Where You’ll be Proud to Be.

The University of Arkansas at Pine Bluff houses over 1000 students on its campus. Though the main campus is in Pine Bluff, its reach is worldwide. UAPB has an extended campus in North Little Rock and offers courses in Gould and Marianna as well as online courses.

UAPB is an equal opportunity/affirmative action institution that adheres to the basic principles of non-discrimination. In keeping with this practice, UAPB reaffirms its policy of providing equal employment opportunity without regard to race, color, creed, national origin, sex, age or disability.

The 20:1 student to teacher ratio makes it possible to maintain a learning environment with close interaction between students and faculty while challenging curricula encourage our students to seek and fulfill their potential.

You can excel in your chosen field of study through a curriculum of more than thirty Undergraduate programs, Master’s degree programs, Certificate and Associates degree programs and develop workplace readiness through internships, co-ops and fellowships in the U.S. and abroad.

With the addition of the Arkansas Research and Education Optical Network (ARE-ON), students can engage in information exchange with others anywhere in the world. There is also Research and Extension offices in Lonoke, Newport and Lake Village and collaborations with other colleges and universities in the State through the National Science Foundation funded STEM (Science, Technology, Engineering and Mathematics) Academy.