You are here: Home / List of HBCUs by State / Tuskegee University 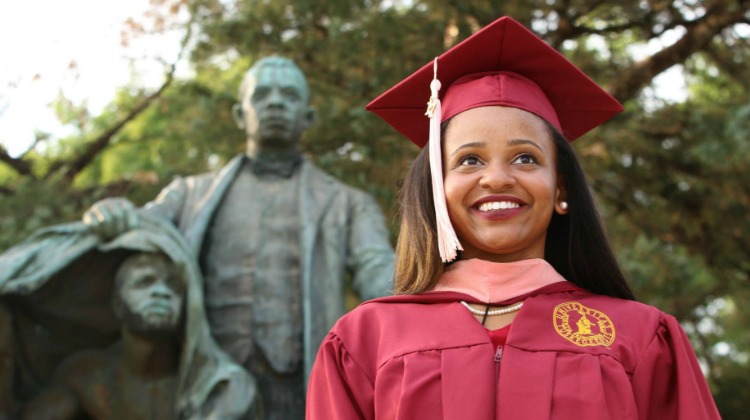 On July 4th, 1881, Tuskegee University was established in the midst of a difficult election. W.F. Foster, a former Confederate Colonel and Democratic candidate for state senate, asked Lewis Adams to help him secure the African-American vote. As a former slave and community leader in their predominately-black county, Adams only wanted one thing in exchange for his support: a college for African-American students.

Their political deal transformed the lives of millions of Americans, from the collegiates who walked through Tuskegee’s hallowed halls to the men and women who owed their lives to the Tuskegee Airmen of World War II. Today, TU is known for its distinguished undergraduate and graduate degree programs (such as the Tuskegee University Vet School), athletics department, and Marching Crimson Piper Band, which is the oldest HBCU marching band in the nation.

Tuskegee University is located in Tuskegee, Alabama, within driving distance of Montgomery, Birmingham, and Atlanta, Georgia. Students can travel to events in any of the cities surrounding Tuskegee, or enjoy the natural and historic beauty of the school itself. With landmarks like The Oaks (Booker T. Washington’s former home), Morton Field, and the George Washington Carver Museum, it’s no wonder that the Tuskegee University campus has also been named as a National Historic Site.

Tuskegee University was founded in 1881, when W.F. Foster won the election for Alabama State Senate with the support of Lewis Adams (an African-American community leader) and the constituents that he rallied to his cause. In exchange for their votes, Foster pushed legislation to create the Tuskegee Normal School for Colored Teachers.

With the aid of Booker T. Washington, who left his position as a Hampton Institute teacher to become the principal of the new school, the student population grew from a small contingent of local students to an international community of African descent. As Washington secured the patronage of philanthropists like Andrew Carnegie, John D. Rockefeller, and George Eastman, the school grew as well; from 1881 to his passing in 1915, the Tuskegee University address changed from a rundown church to a 100-acre campus in the same community.

During the 20th Century, the school became known for the groundbreaking accomplishments of the Tuskegee Airmen and disastrous implications of the Tuskegee Syphilis Experiment. But through it all, Tuskegee University was still dedicated to its first (and most important) mission: the education and edification of African-American students.

Now, thousands of students apply to Tuskegee University every year! TU is known for its distinguished undergraduate and graduate programs, from the engineering department that has been ranked as one of the best in the nation by US News and World Report to the Tuskegee University Vet School for qualified graduate students. To this day, Tuskegee University is the only historically black college or university to offer the Doctor of Veterinary Medicine (D.V.M.); it also produces 75% of the African-American vets in the world.

The TU athletics department has a wide range of NCAA Division II sports programs. In addition to Tuskegee University football, students can participate in basketball, baseball, softball, cross country, tennis, track & field, and volleyball; many of these sporting events are held in the Cleveland Leigh Abbott Memorial Alumni Stadium.