You are here: Home / List of HBCUs by State / Arkansas Baptist College

Arkansas Baptist College (ABC) is a private, historically black liberal arts college located in Little Rock, Arkansas. Founded in 1884 as the Minister’s Institute, ABC was initially funded by the Colored Baptists of the State of Arkansas. It is the only Baptist HBCU west of the Mississippi River. It’s nickname is Buffaloes and the University is a member of the Baptist. Their colors are Purple and white and their motto is It’s a GOoD Thing! 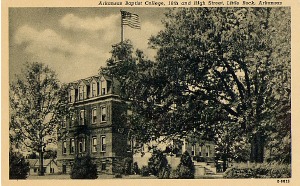 For over 100 years, ABC has served as Arkansas’ only black Baptist higher education institution. Arkansas Baptist College has been accredited since 1987 by the Higher Learning Commission of North Central Association of Colleges and Schools (HLC).

Arkansas Baptist College prepares students for a life of service grounded in academic scholarship, the liberal arts tradition, social responsibility, Christian development and preparation for employment in a global community.