You are here: Home / List of HBCUs by State / Fisk University

Fisk University is an historically black university founded in 1866 in Nashville, Tennessee, U.S. It’s nickname is the Bulldogs and the University is a member of the Gulf Coast Athletic Conference (GCAC). Their colors are Gold and Blue and their motto is Her sons and daughters are forever on the altar. 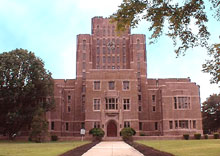 Fisk’s twenty-eight-building campus, located on more than 40 acres. Jubilee Hall, which was recently restored, is the oldest and most distinctive structure of Victorian architecture on the 40 acre (160,000 m²) Fisk campus.

Fisk offers its students an exceptional curriculum and dynamic learning and mentoring experiences with an award-winning, professionally renowned faculty in the field of Arts, Business Administration, Science, Music/Music Education, Nursing.