You are here: Home / List of HBCUs by State / Coppin State University

Coppin State University is a historically black college located in Baltimore, Maryland, United States. It is part of the University System of Maryland. It’s nickname is the Eagles and the University is a member of the Mid-Eastern Athletic Conference and NCAA’s Division I. Their colors are Old Gold and Reflex Blue and their motto is Nurturing Potential…Transforming Lives. 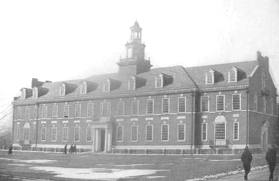 Coppin’s tree-lined 52-acre campus in West Baltimore is one of the city’s most impressive settings for learning. It is very much an urban campus and is easily accessible by public transportation, 15 minutes from the Inner Harbor and within 20 minutes by car from most parts of the city. Yet with its lovely shaded walks and fountains, Coppin has the atmosphere of a serene residential college. Most buildings on campus are new, modern and comfortable.