You are here: Home / List of HBCUs by State / Central State University

Central State University, commonly referred to as CSU, is a historically black university (HBCU) located in Wilberforce, Ohio, United States. It is the only public HBCU in Ohio, established in 1887. It’s nickname is the Marauders and Lady Marauders and the University is a member of the National Collegiate Athletic Association (NCAA). Their colors are Maroon and Gold and their motto is Change is Central. 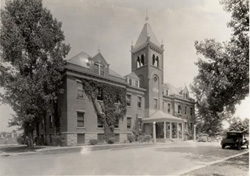 The main campus is located in Wilberforce, 4 miles (6.4 km) northeast of Xenia, 18 miles (29 km) east of Dayton and midway between Cincinnati and Columbus, Ohio (about 55 miles (89 km) from each city). A branch campus (CSU-Dayton) is located in Dayton.

Adjacent to the main campus is an outdoor education area, a natural reserve. Within a hundred yards of the Robeson Center is the National Afro-American Museum and Cultural Center, operated by the Ohio Historical Society.