The United States Army presented a patriotic flag salute in honor of historically black colleges and universities during the 2011 Essence Music Festival. 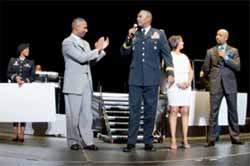 The presentation featured Army ROTC Cadets representing their historically black college and a check presentation of education scholarships totaling over $13 million to the United Negro College Fund and the Thurgood Marshall College Fund.

The U.S. army has sponsored the Essence Music Festival since 2000. This year, a record number of Army general officers and soldiers participated in several Army-sponsored events including a seminar “Promise, Pride and Power of the HBCU Education” for Essence’s “Transforming Your Community Empowerment Experience.”

CNN reporter Soledad O’Brien was the moderator for the discussion about the current state of higher education and the financial and social challenges for young African Americans attending HBCUs.

The Army offers a variety of education benefits for those who choose to enlist, including up to $80,000 through the Army College Fund and the Montgomery GI Bill for education and career development.