You are here: Home / HBCUs / Music Icon Rev Run Speaks at UAPB for Welcome Back Week 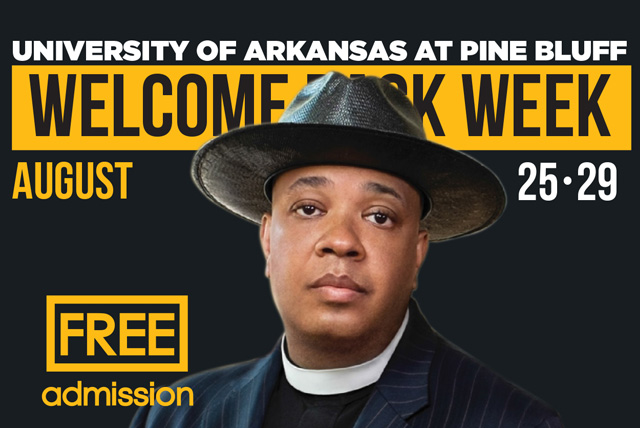 The school year is set to begin at the University of Arkansas at Pine Bluff (UAPB) with exciting new developments and initiatives to improve the collegiate experience. Apart from an upcoming launch of a new fitness center and Science, Technology, Engineering and Math (STEM) Academy and Conference Center, the newest addition to the UAPB experience is the Pride Forum.

A collection of distinguished speakers sponsored by different organizations, the Pride Forum began with Joseph “Rev Run” Simmons on Tuesday, August 26 at 6:00 p.m. in the H.O. Clemmons arena of the Kenneth L. Johnson, Sr. Health, Physical Education and Recreation (HPER) Complex. Sponsored by the Office of Student Involvement and Leadership, the free, public event is the main attraction for Welcome Back Week at UAPB.

One of the most iconic figures in music, Rev Run is the front man of seminal hip-hop group Run-D.M.C. and has sold tens of millions of records worldwide and is widely credited for ushering rap music into mainstream culture. An inductee of the Rock & Roll Hall of Fame, Run-D.M.C. was named the greatest hip-hop artist of all-time by both MTV and VH1.

Recently, Rev Run has become a highly sought-after deejay and public speaker. Behind the turntables, Rev Run has toured around the world headlining music festivals across Europe and performing at high-profile events at the Super Bowl, American Music Awards, and New York Fashion Week. A dynamic speaker, Run has relayed his positive messages of family, faith, and hip-hop at some of the world’s largest churches and most prestigious universities.

Run remains a dynamic figure in entertainment today. His hit MTV show, Run’s House, aired for six seasons and became one of the most widely viewed shows on cable television. Starring alongside his wife Justine and their six children, Run became America’s favorite father and a paradigm of family values, humor, and spirituality. Run’s House set the groundwork for Take Back Your Family: A Challenge to America’s Parents – a book Run co-authored with Justine.

In 2008, he penned Words of Wisdom: Daily Affirmations of Faith from Run’s House to Yours. His third book, Manology, co-authored with Tyrese, became a New York Times Best Seller instantly, still selling thousands of books weekly and holding firm on the bestseller list. Run’s daily inspirational words of wisdom are followed by 4,000,000 people on Twitter and has established him as a thought leader in the world of social media.

In 2013 Rev Run starred in the Super Bowl commercial for the new Lincoln MKZ. He is serving as an ambassador for Novo Nordisk in their Ask.Screen.Know. campaign Rev Run and his family have just finished airing their show Rev Run’s Renovation, which became an instant hit amongst existing fans as well new fans worldwide. He and his wife have just finished filming their new show Rev Run’s Sunday Suppers.

For more information about the event, please contact the University of Arkansas at Pine Bluff office of Student Involvement and Leadership at (870) 575-7060.