Five teams of Central Intercollegiate Athletic Association athletes hit the water and scaled walls as part of their training in April at the U.S. Navy SEALs’ Little Creek Naval Amphibious Base in Virginia Beach, Va. 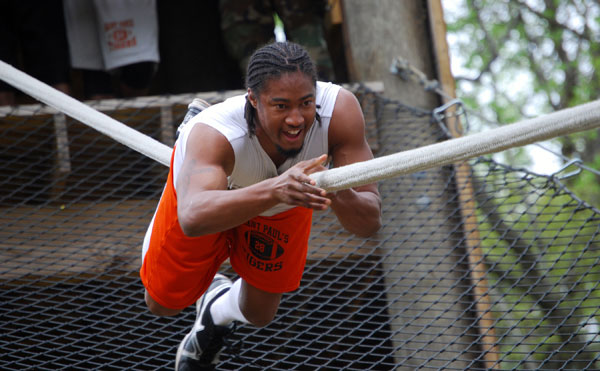 The training—part of a “Mental Toughness, Never Quit” campaign conducted by the SEALs for CIAA schools—occurred April 16-17. The event was a follow-up to on-campus seminars at the CIAA schools in February and March.

The goal of “Mental Toughness, Never Quit”—which includes goal-setting, visualization, positive self talk and 4x4x4 breathing skills—is to provide valuable training to athletes while making them aware of potential career opportunities within the SEAL Teams. The SEALs provided players with a unique look into how mental preparation is essential to winning.

Navy SEALs are a special breed of warrior who conduct special operations in any environment, but who are uniquely trained and equipped to operate from, around and in maritime areas. SEALs take their name from the environments in which they are trained to operate: sea, air and land. Their small highly trained teams usually work quietly at night conducting some of the nation’s most important missions. SEALs are constantly deployed throughout the world to protect U.S. national interests.