FREDRERICK, Md. – On a sweltering June day near Frederick, Md., Shayla Monroe was in the farthest corner of the L’Hermitage slave village. Trowel in hand, she excavated her 10′ by 10′ quadrant.

The senior anthropology major rigorously screened then gently searched for artifacts. During the interview, she found a piece of ceramic, which she cleaned and dropped in her labeled brown paper bag along with other artifacts such as nails, bottles and utensils. The team also uncovered advertisements for slaves who fled the plantation. 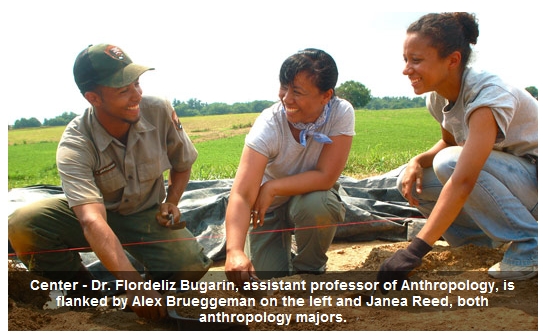 The archeological excavation is at one of the largest known slave sites in the region, located approximately 40 miles from Washington, D.C. Today, it is known as Best Farm.

Monroe and her classmate Alex Brueggeman excavated at Monocacy for the second year; they will intern with the Park Service for the entire summer. Clad in olive NPS uniforms, the seniors are leaders on the site. Coupled with the strong theoretical foundation they have gained in their Douglass Hall classrooms and labs as well as the experience in the field, the Howard students are preparing for work in the field of archeology.

“What you learn in class does not click until you are in the field,” Monroe said as she wiped away sweat from her brow. “In field work, you get one shot so you must get it right, so the more experience you have the better.”

The archeological site is associated with L’Hermitage, a plantation established in 1794 by the Vincendières, a family of French planters who came to Maryland from Saint-Domingue (known today as Haiti). By 1800, there were 90 slaves at L’Hermitage, making it the second largest slave population in Frederick County and among one of the largest in Maryland. Last summer, the remains of six dwelling houses were uncovered, as well as artifacts associated with the enslaved occupations of the site from 1794 until 1827. The Vincendières were said to have fled Haiti ahead of the 1804 slave revolt and brought 12 slaves with them to Maryland. The other 80-plus slaves were acquired in the U.S.

NPS has helped to maintain the structure of the original plantation home. The house bears many characteristics of Haitian architecture. Several of the large French windows in the front of the house provided an unobstructed view of the plantation.

“This year, the benefit of the brief field experience to students was immeasurably heightened by the fact that most of them were familiar with the types of historic artifacts being found ahead of time,” King said. “Several of the students have been interning this summer with Dr. Bugarin in Howard’s archaeological lab and working with artifacts from other historic African-American sites. That made it much easier for them to be able to pick out significant bits and pieces in the screen and on the ground.”

The student anthropologists are attempting to trace history and gain an understanding of the way of life for the nearly 100 African slaves. For some, the excavation is a personal journey and allows them to dig deep inside.

“This project definitely holds a special significance because of my ties to Haiti. It is a powerful irony that has essentially revolutionized and altered my understanding of where I come from,” said Brueggeman, born in Arizona to a Haitian father and a Dutch mother.

He adds, “Learning about the enslaved individuals from Haiti at L’Hermitage and how they may have lived has given me a whole new level of respect and admiration for the Haitian people and their resiliency.

Information from the excavations will be used in the development of new exhibits and interpretive programs focusing on slavery and African-American experiences at Monocacy National Battlefield.