At around 1:30 p.m. on August 23, Imani Muhammad, a senior accounting major, was walking down the hallway in the Howard University School of Business. She noticed elevators shaking.

Around the same time, waiting in line for financial aid, freshman Eric Mays had his back against the wall and felt his body shake.

“The wall just started moving. I thought someone was doing work on the other side of the wall, but then the floor started moving,” Mays said.

Mays became one of the thousands of Howard University students who immediately ran out of University buildings to seek refuge from what they later found out was a 5.9 magnitude [downgraded to 5.8] earthquake and 5.4 magnitude aftershock that shook the majority of the eastern seaboard. 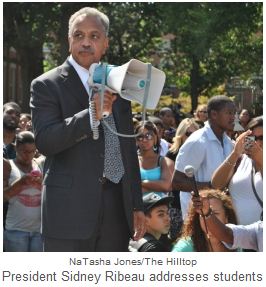 The epicenter of the quake was located in central Virginia, miles from D.C. The earthquake was reportedly felt as far west as Detroit.

Moments after the tremors ceased, students were seen fleeing buildings in droves as if the buildings were on fire. All members of the Howard University community were instructed to remain outside of all buildings until federal regulators are able to come to campus and inspect buildings.

“We have no idea what has happened. Our main concern is what is the status of the buildings in regard to structure and occupancy,” said Howard University Provost James Wyche.

Sophomore education major Kimonie Moore was walking out of the School of Education at the time of the quake. She described seeing windows bust, debris fall and structures of University buildings begin to falter at the strength of the moving ground.

“I thought it was just happening in one building, but then I noticed the whole earth was moving,” Moore said. “I’m from Connecticut, we don’t get those.”

Students like senior biology major Keionna Wilkerson, on the other hand, are used to these kind of natural phenomenon.

“You should have seen everyone’s faces as they ran out of the buildings, but everywhere you go the ground is going to shake,” Wilkerson said.

Wilkerson, who is originally from Los Angeles, has experienced about 10 earthquakes in her life, but even she knew the severity of this earthquake.

“I feel like the epicenter was close because it was a really strong shake. All I could think to do was sit there until it passed. That’s really all you can do.”

Allen Reynolds, senior TV production major from Chicago, decided to get students to join in a prayer circle. Reynolds who was in Armour J. Blackburn at the time said he left the building calmly as students rushed out the front.

“In a time of crisis, it’s a time to run back to God,” Reynolds said.

“I’m glad everybody was able to find each other because of the prayer circle,” he said.

Two students who joined in the prayer circle were friends Nailah Baukman and Charda Stallings.

Stallings, a senior advertising major from Chester, Penn. was sitting on the stairs of the College of Nursing with her friend Nailah Baukman when the earthquake hit.

Stallings was able to reach her sister through text message, but was unable to call her. As someone from the East Coast, this earthquake was a new experience for her.

In the case of an earthquake, people are instructed to protect their bodies from falling debris and objects by getting under tables and desks. Stay tuned to Howard University emails and alerts for further information.